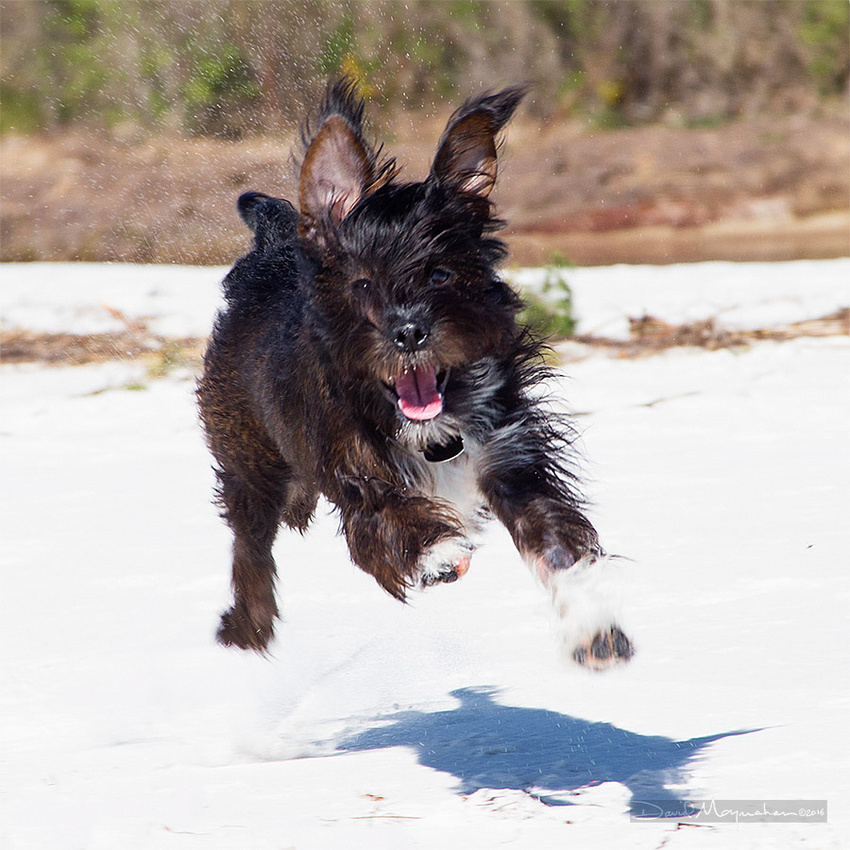 We started by getting a new dog, Scruffner.  Living in the country in Wakulla County, we quickly recognized that a neighboring pit bull and other dogs who roam freely in our woods could be a serious danger to him and that we needed a fence, both to keep him in and keep danger out... and that the fence should include the part of our yard and woods that we use most so he can romp freely with us... and that would mean a gate across our driveway... and that would mean getting out of the car to open and close the gate each time we left and again when we returned.  Wait a minute, what?!  Oh, maybe an electric gate? To run electricity way out to the driveway entrance would be cost-prohibitive (or at least add a heap to this whole fence project), so an electric gate was untenable.  And we live in the woods, so not enough solar energy to run a gate... too bad - there are some good solar options.

It was at that point in our thinking that my wife, Crystal, asked, "Can't you figure out a way to make the gate open and close without getting out of the car?" My inner wheels had already started turning. Being a perpetual tinkerer and learner, I always love a good engineering challenge.  I once saw a film about Temple Grandin where she invented a mechanically driven gate - a feat which stuck in my head for all these years.  So that's where I started... searching for her design online. No luck, but I did find an obscure Q&A where TG answered another person begging her to publish her gate design. Ms. Grandin said her design was clunky and obsolete given today's solar options, and left it at that. I also remembered a simple old-timey garden gate at the Tallahassee Museum that shut itself using a weight.  The basic design features quickly evolved in my head, but as they say, the devil's in the details. 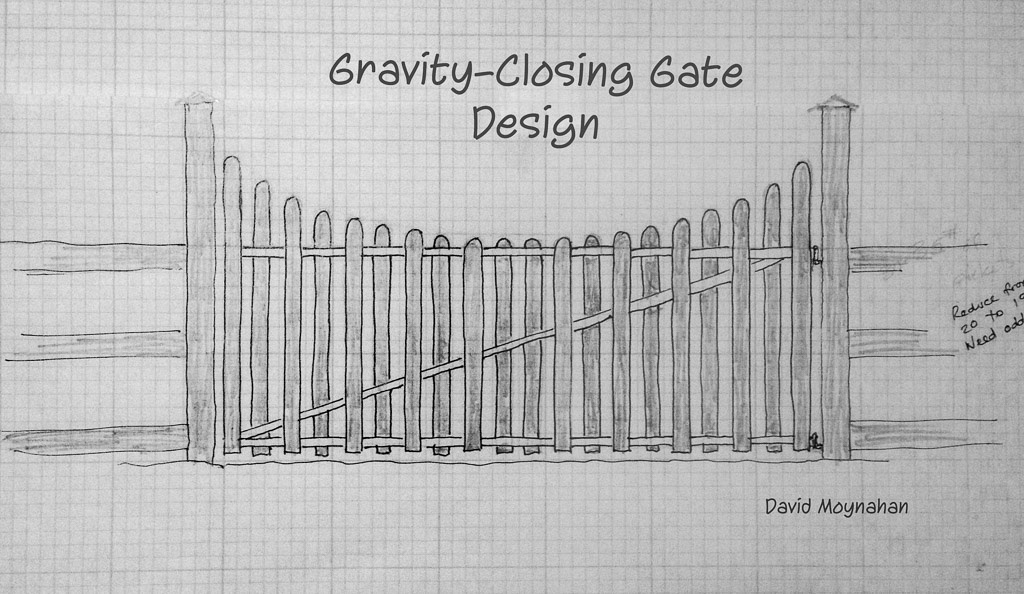 So here were our objectives:

1. Get out of car as few times as possible.

2.  ​Use gravity or mechanical device to close the gate.  And open it too?

4. Make it attractive.  Our gate opening is a bit less than 12 feet, not a standard size, so it had to be custom-made anyway.  Our old double gate, a steel frame with vertical wood pickets made a graceful shape when closed... but it was NEVER closed, never used because we were too lazy to get out of the car all the time and what's the point anyway since we weren't fenced? Still it was the standard by which Crystal wanted for the new gate's appearance.

5. Make it secure enough when shut for animals on both sides. 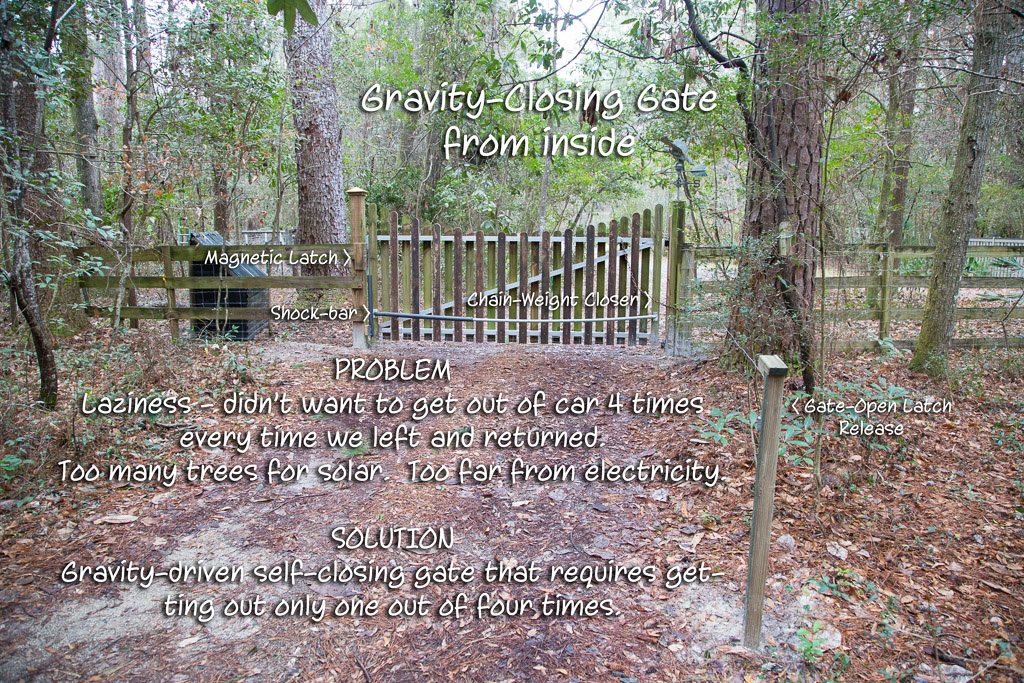 My first idea was to use the power of the car to open the gate. A springy bow - the Bump Bar -  across the inside of the gate could be used to pop it open with the vehicle's bumper.  This idea has proven to work beautifully, eliminating one get-out-of-the-car.  Then to use a spring or weight to automatically pull the gate shut, score TWO for our lazy asses.  (There are commercial gate springs and spring loaded hinges, but they would shut my gate too fast and with too much force.) Hooking the gate open when returning home was easy (though meant getting out), and then unlatching the hook via a pull cord outside the driver's window after entering saved a third "get-out". I am still working on the next generation of this gate - to make the gate swing both ways and latch magnetically in the shut position.

Here is the current version of the self-closing gate in action.

I figured aluminum was strong, lightweight, and attractive enough for the frame.  And I have a friend, Jeremy, who is a superb aluminum welder. Having collaborated on a previous complicated project that we both enjoyed immensely, he agreed to assemble a simple gate frame for me. 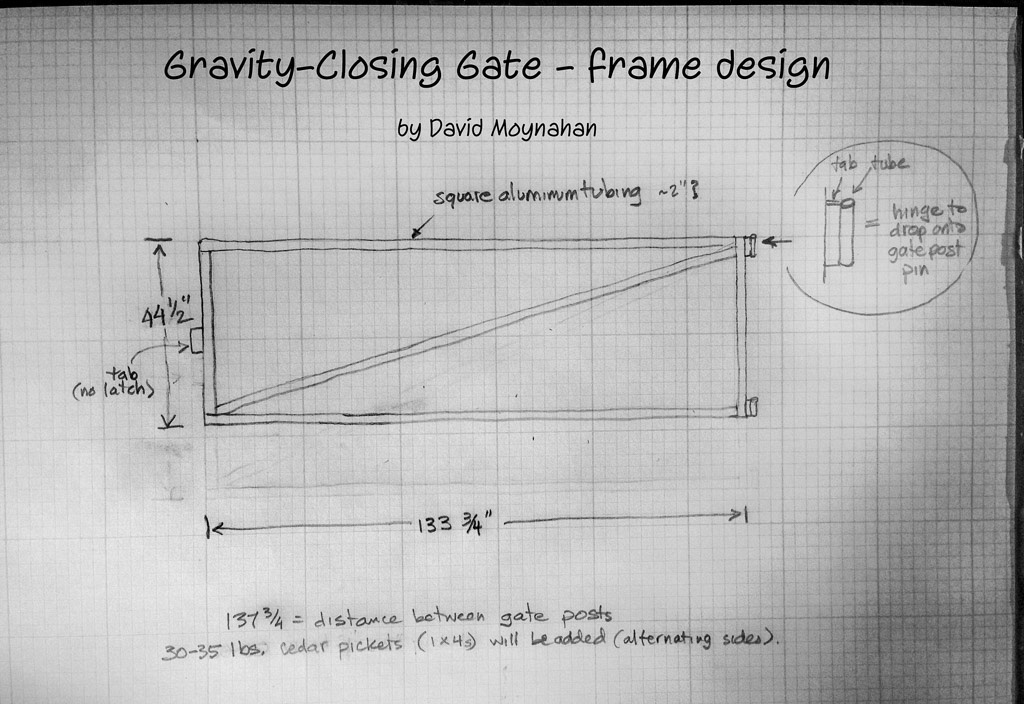 For Crystal, I decided to re-use the old wood pickets which had a nice algaed patina, and mimic the shape of our old double gates. 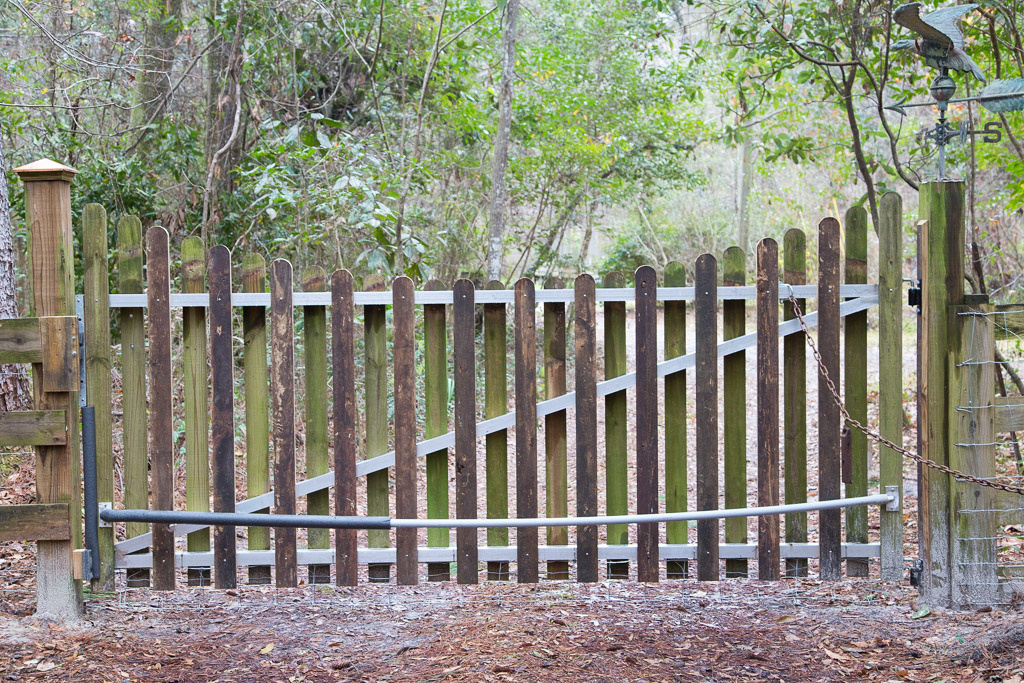 I started out experimenting with screen-door springs to close the gate.  That worked okay, using two springs, but I couldn't get them adjusted to NOT slam the gate too hard.  Soon I dug an old tow chain out of our shed along with a couple window weights.  This proved to be much more sensitive to adjustments AND more aesthetically pleasing.

Below are detailed photos and descriptions. I've also included links for parts that I ordered online.  And I published a YouTube video about this project that's here: 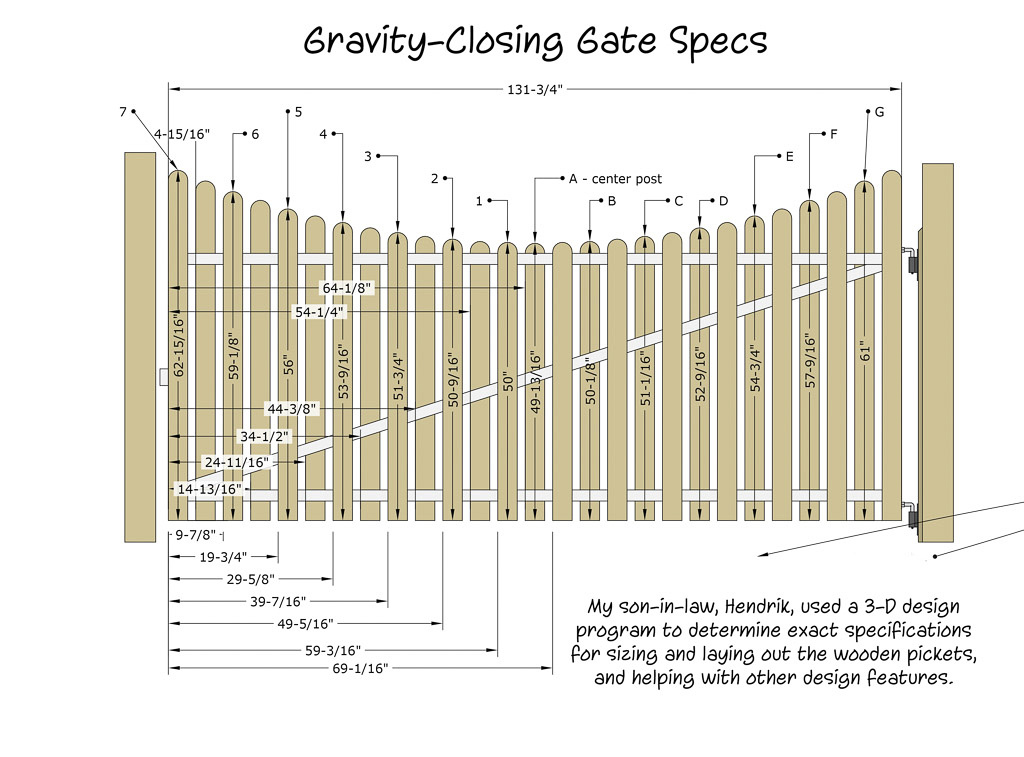 My son-in-law, Hendrik is a master at Sketchup.  He was visiting at the time of this project and helped with a lot of details. The program quickly told us measurements, spacing, angles, gate-swing range, and other technical details that would have taken much longer to do longhand or by trial-and-error. 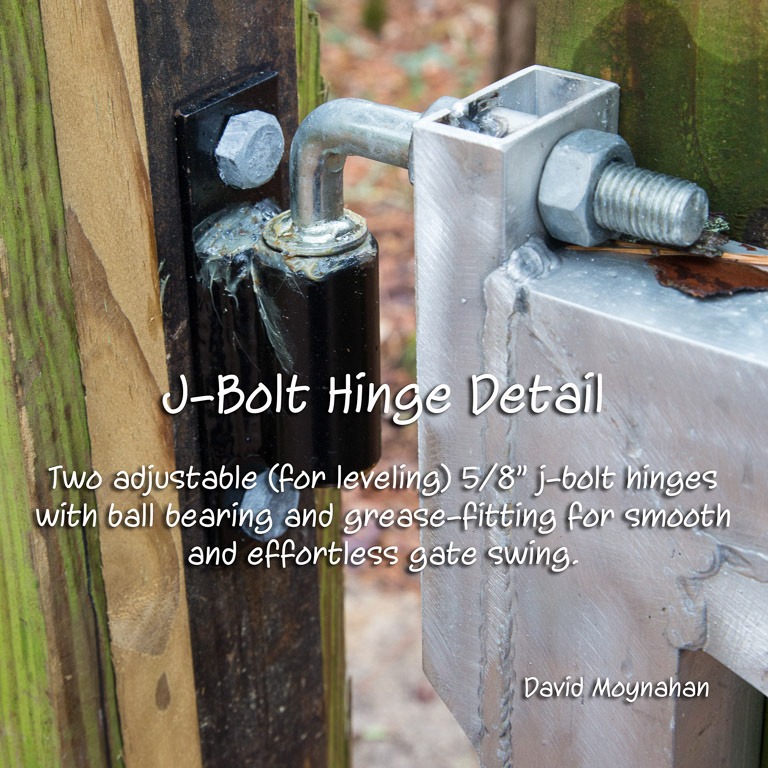 I wanted to gate to swing with minimal resistance so I sprung for an elegant heavy-duty J-bolt hinge that I found at Amazon for $14 each.  It has a ball-bearing and cup of grease (and grease-fitting at bottom).  A great gate hinge.

Next, the "Bump Bar"...  I was hoping a piece of PVC pipe would be a good bow, and my quick sketch suggested that angling 10 degrees off each end of the gate would put the middle about a foot away from the gate. (I had Jeremy make the fasteners before Hendrik arrived, so no chance to get a Sketchup confirmation on the angle.)  This turned out just right, but a single layer of PVC was to flimsy, so I put a 1/2" pipe inside a 1" pipe.  This worked perfectly.  Plenty of spring when the vehicle bumps it, but plenty beefy as well.  And the fasteners hold it in a nice bow. 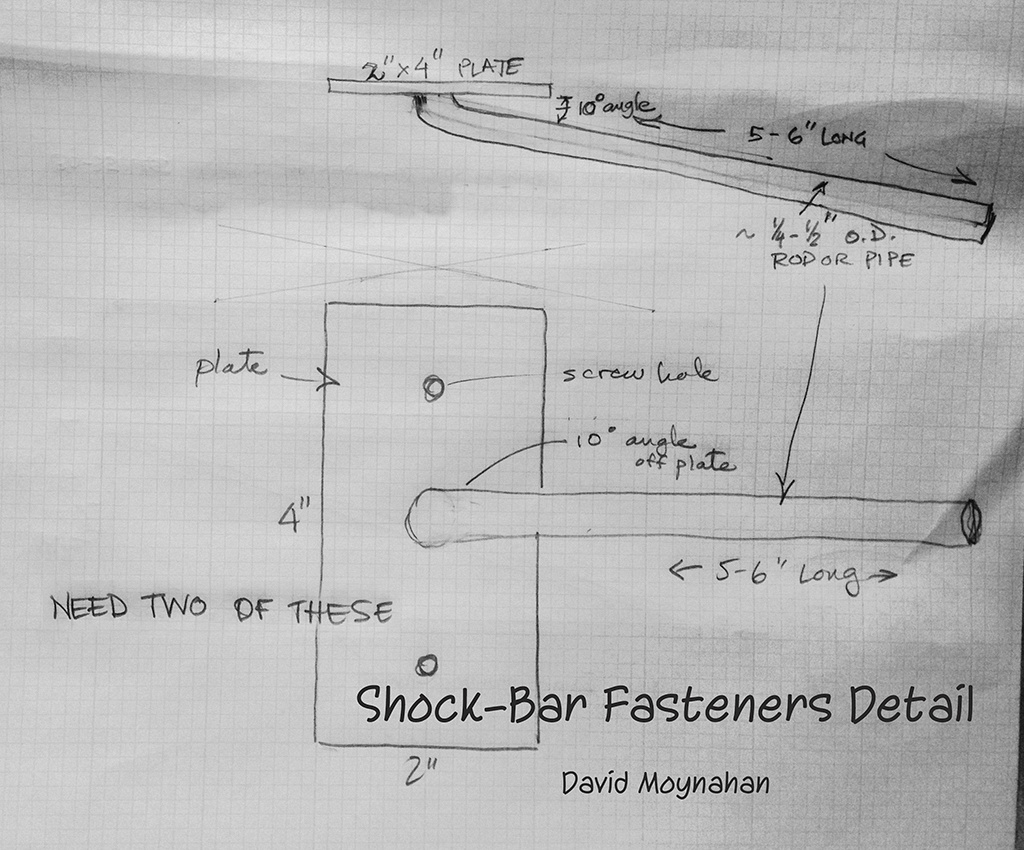 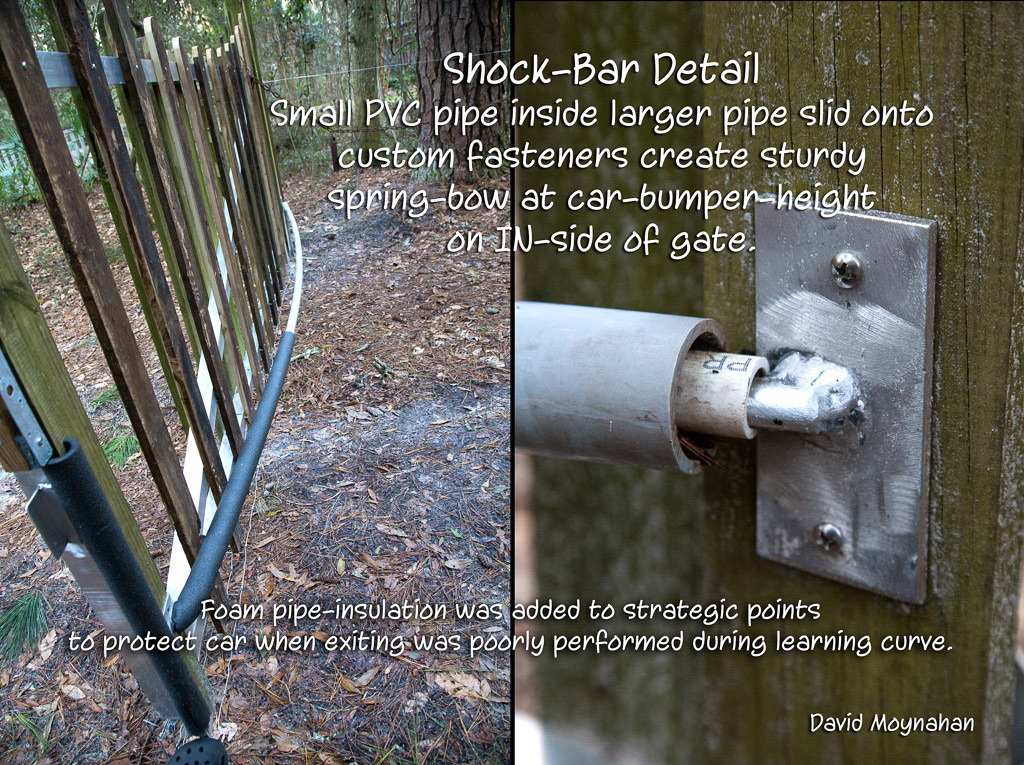 I needed a latch that was strong but could be opened without manually unhooking. It needed to be able to handle a heavy gate hitting it pretty hard, catch the gate and not destroy itself over time.  I had an old magnetic knife rack in my shop that Hendrik and I experimented with, but he told me about small round, much stronger neodymium magnets. I got a couple of them here, for $10, and they work much better than the knife rack. I threaded them onto a long bolt with layers of foam padding so they had some play (shock absorption) when struck by the gate. 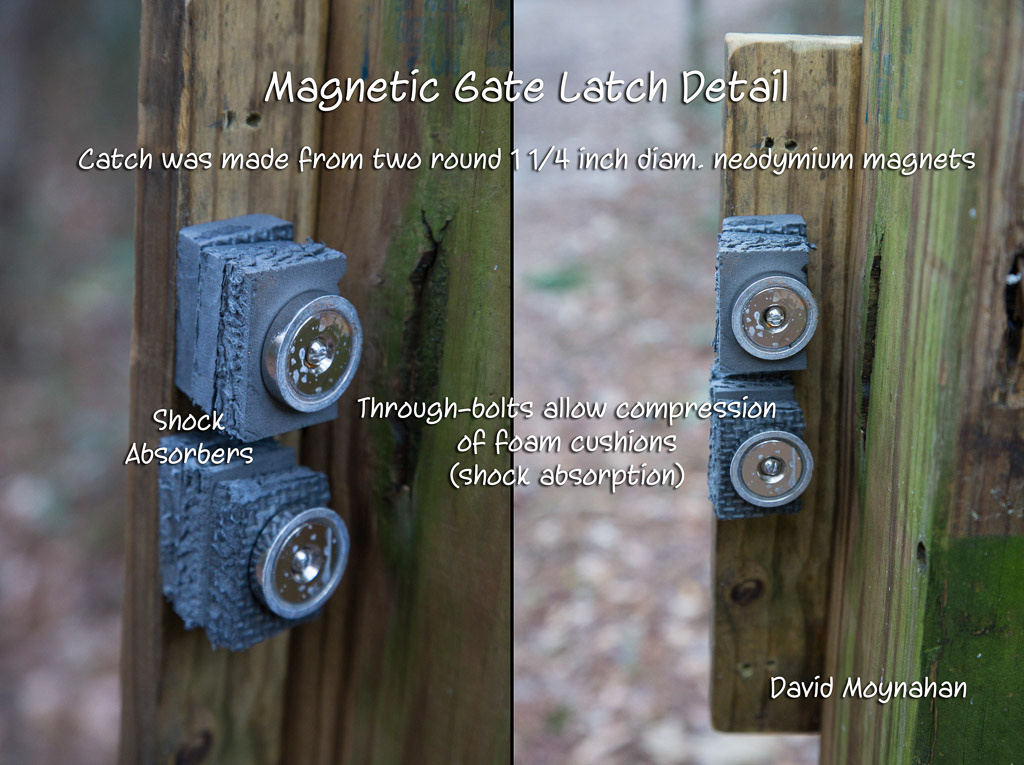 I had some galvanized steel tie straps used in framing (building) that stuck to the magnets pretty well. We had the idea to space this away from its mount to give it some springy shock absorbability as well. That turned out to be key, not only because it took up a lot of the force of the slamming gate, but also, by bowing, it peels nicely away from the magnets when the gate is bumped open.  A simple 1/4" foam spacer at each end of the strap allowed for this bowing freedom. This pair of photos may be a bit confusing at first.  The one on the left shows the spacing of the tie strap. The shot on the right shows the (backside of the) magnet catch a few inches away, ready to "kiss" the tie strap as it swings shut. 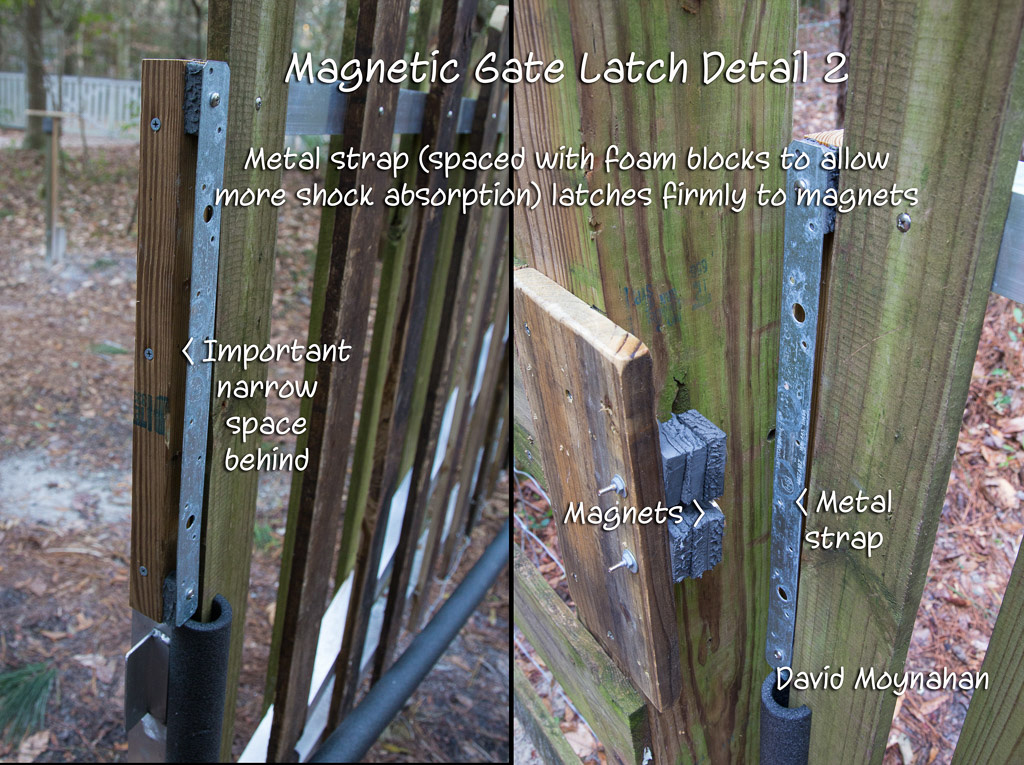 We do have to get out of the car when we return home to latch open the gate.  It's no problem if Scruff is out since he's happy to see us AND he loves the car, so he'll jump right into the open door rather that run down our dirt road.  I made a prototype latch from a scrap of wood. It worked so well, I left it.  The latch is at the top of a post and mounted with a slightly loose screw.  Several washers are stacked beneath the latch.  It rotates freely.  A thin coated cable is tied to the bottom end of the latch and runs all the way to another post inside the gate. 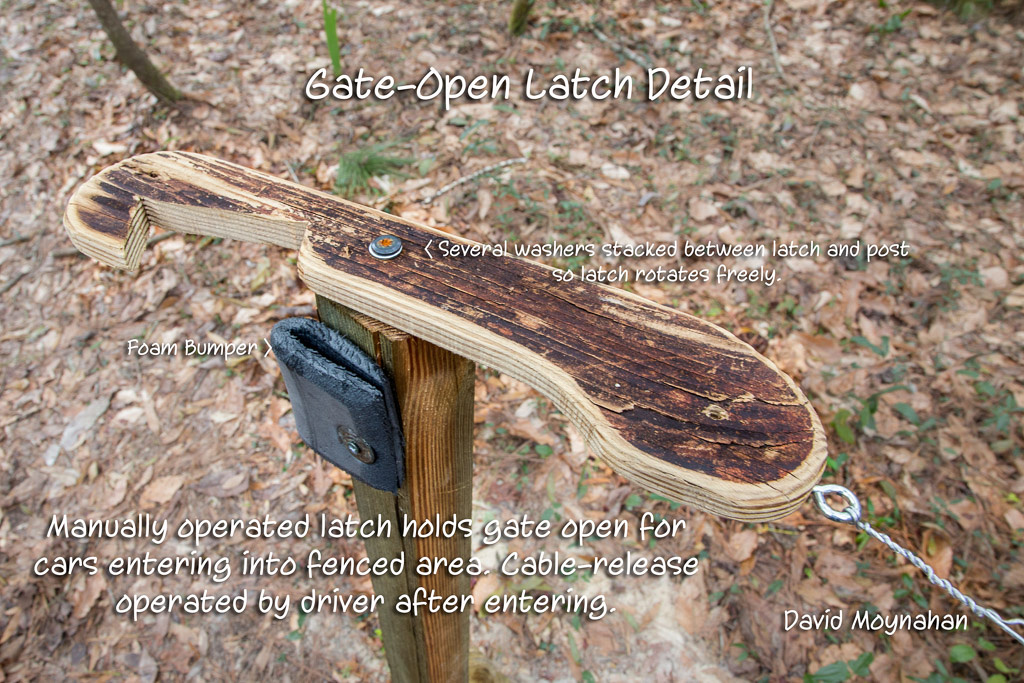 Here's that other end of the cable.  The fishing weight is about the height of a hand reaching out of the driver's side window of a car.  (The weight keeps slack out of the cable.) Pull down, and the gate closes. 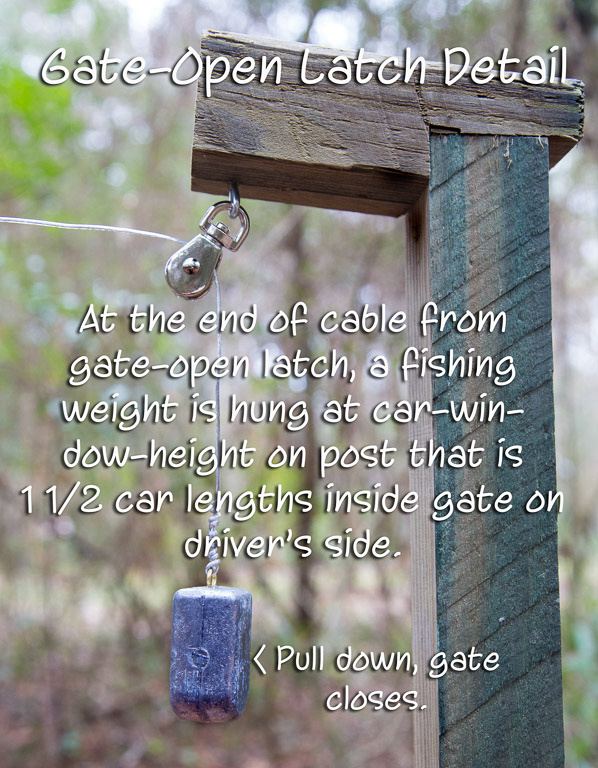 There are many ways to make a gate close by itself.  There are springs made just for this. I needed a gate that closed very slowly... that hung fully-open for a moment before starting to close.  A weak spring like a screen door spring was enough pull, but I couldn't get the gate momentum balanced... either the gate would get stuck fully open, or it would have too much force at the end and slam shut.  I needed reliable slow gentle closure.  That turned out to be much easier to finesse using a long heavy chain. My chain wasn't heavy enough on its own, so I added a couple window weights (4 and 5 pounds, which I happened to find in my shed not far from the chain.)  Wind from the west can slow and stop our gate when closing, but in the woods, wind is tempered and gusty. From any stalled position, the chain persists in drawing the gate shut as soon as the wind shifts a little or lets up. 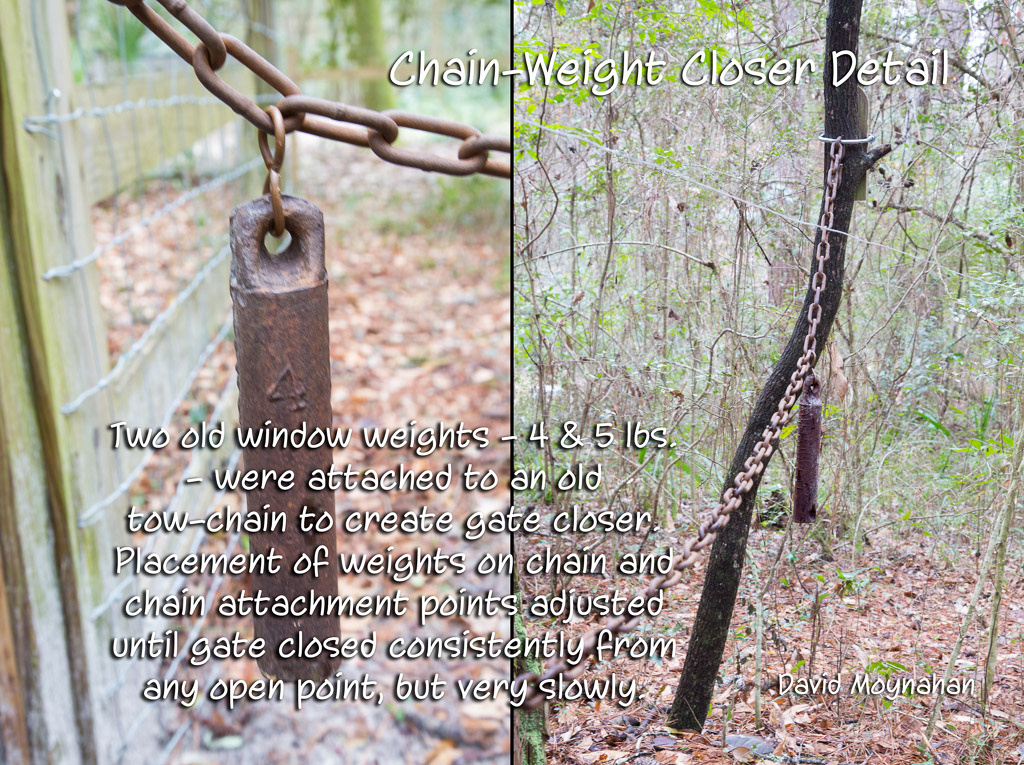 The angle of the chain to the closed gate (70 degrees) AND to the fully opened gate (185 degrees - a little beyond parallel) affected the speed and force of closure (and whether the gate would close at all), so I moved the two end points of the chain left and right until the gate worked best (degrees noted).  The height and tension of the chain also affected this. In my gate, the 12' chain hangs between points 10.5' apart, and both ends are 50" above the ground. Likewise, the position of the window weights on the chain seemed to work best when each weight was nearer to each end of the chain.  When the weights were close to the middle, the gate closed faster with more force.

That's it.  Hope this helps you figure out a way to make your gate work for you.  I hope to be writing a sequel when I hone my ideas for a fully self-opening-and-closing driveway gate and make it happen.

I made a YouTube video from these slides.  Here it is:  https://youtu.be/GBVNxDIEDZ8

Feel free to use any or all of these ideas, and to share this with any gate owner you know who might be tired of manually running the gate.