Halloween-time-of-year has me in the mood for looking into the night. 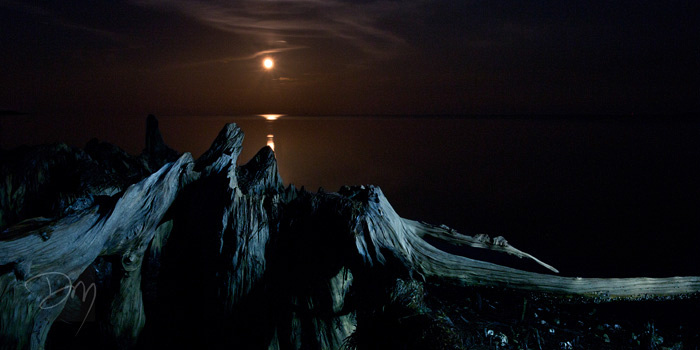 Moon Over Craggy PeaksOn my way home from Apalachicola, I saw the moon just beginning to break through the clouds on the horizon. Pulled off the road and scrambled down the rocks to the water's edge. Composed and focused with a flashlight and hoped for the best.

"Painting with light" is a concept I'd not heard of until about 7 years ago from my photo pal, John Moran, who by then had quite a mastery of adding light to his subject or scene being photographed.   While there are many varied techniques called Light Painting, I think of it generally as lighting objects in a scene using a handheld light during a long exposure in the dark (or near dark).  Beyond that, it can reach as far as one's imagination.

Some have said the scene above, Moon Over Craggy Peaks, evokes a vision of Mordor from the Lord of the Rings.  I like that.  Driving home from Apalachicola one evening, I saw the nearly full moon break the horizon over the Gulf of Mexico.  I pulled onto the narrow shoulder and scrambled down the treacherously dark rip-rap to a narrow beach where old tree stumps whispered of former forest and serious erosion. Using a small flashlight I quickly located a stump I liked.  The moon was rising too fast to dawdle. It took several attempts to get the moon/sky exposure right and then I used my little flashlight to spray light across the stump while the shutter was open.  Simple as that. (Although, it usually works better when one anticipates the moonrise and has scouted his composition.)

The Super Moon of 2011 was all over the news, so I did plan for "Super Mooned".  The idea was to show the grandness of the moon by juxtaposing it with a known object for scale.  I needed to maximize my telephoto lens power and get as far away from the lighthouse as I could (to make it small) while still having a clear view. The trick was to know where on the horizon the moon would come up and line up the St. Marks lighthouse between me and that precise spot.  Having researched the moon's declination and studied maps, I thought I'd found the sweet spot. NOT. I learned that just a few degrees makes a huge difference. (Plus the moon was invisible in the haze as it crossed the horizon and shifted laterally quite a bit as it rose.)  So I had to shoot the lighthouse as planned, then swing my lens a few degrees to the right to capture the moon.  No change in magnification. I just created a double exposure using the two images. It was an awesome moonrise. 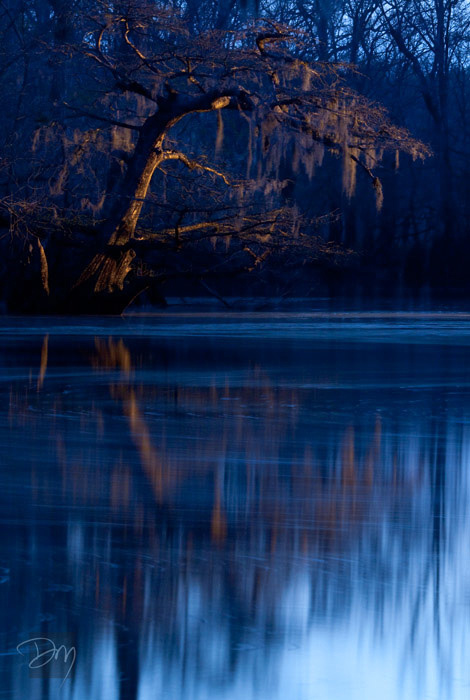 The LeanerLight painting at dusk on the Choctawhatchee River. Walton County, FL.

My first experience with serious light painting was in early 2009 when John and I spent a weekend with new-found friends who lived on the Choctawhatchee River.  Earlier in the day, Ron had shown us an intimate little pond off the main river channel that had this stand-alone cypress hanging over the water.  At dusk, Ron & Friends dropped us off on the swampy shore where we set up our cameras. As darkness gradually fell, we shouted back and forth with Ron who'd anchored his boat at a designated spot perpendicular to the tree.  He did a beautiful job painting the tree using a handheld high-powered Q-Beam.  This first success gave me a rush of exhilaration as we all headed back to a feast Kathryn had prepared for us at the Choctaw Lodge.  I was hooked on light painting. 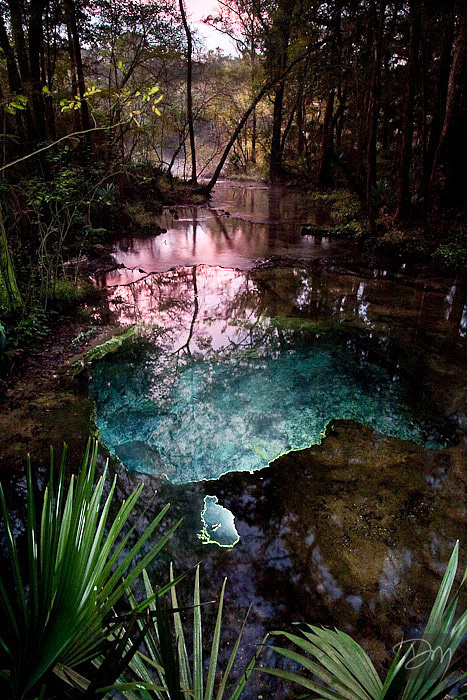 Once when Crystal and I were river camping with our adventure friends, Sue and Jeff, we "discovered" a hidden blue spring bowl nature had carved in a flat bed of limerock.  Clear water welled from the depths and sheeted down the rock slab spring-run to the river. When I showed John my photos, his mind saw a perfect setting for a light painted nightscape.  This was our first all-night collaboration.  A complex photo like this requires a lot of experimentation and the many exposures carefully layered upon one another. (Kind of like the "double exposure" of old, but for this type shot, we might have 20 or more exposures of the identical scene -- each featuring differently lit subjects -- stacked together.)  The idea is to try everything we can think of using light, from dusk to dawn. We take turns releasing the camera shutters vs. light painting parts of the scene. (Then luck added the gorgeous pink-sky reflection in the early morning spring run for the cherry-on-top).  We use various forms of lights, from underwater strobes to handheld flashlights. Many more hours are then spent layering the images in the digital darkroom.  You don't really know what you have until it slowly builds on the computer monitor.  We do our processing separately so often our final paintings of a given scene are quite different from one another, depending on which parts we choose to emphasize. 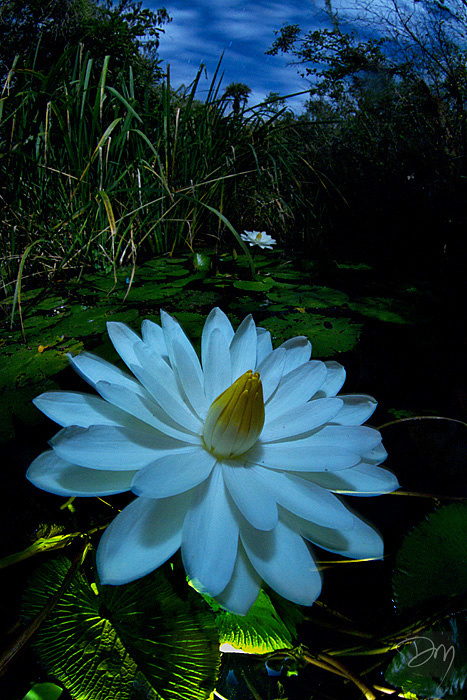 Night BloomerThis huge lily beamed in the moonlight, demanding that I abandon my kayakng in the waist-deep alligator-infested creek to make a photo. Everglades National Park, FL 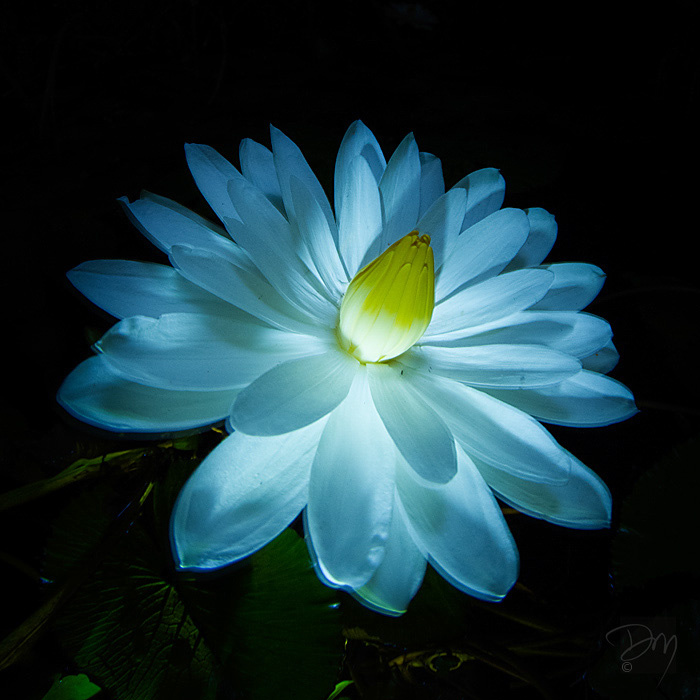 While scouting the mangrove tunnels in the Turner River (Everglades National Park) for a good nightscape setting (the next one below), we passed a couple water lilies in the early evening.  By the time we returned upstream at nearly midnight, the moon had risen and the lilies spread their petals so wide they had doubled in size.  It was irresistible and a bit crazy to climb back into the river that late, but we had to stop and try to capture the beauty of this scene. To get enough natural light for the darker background, the white flower became overexposed.  We ended up shading the flower from the moon to get a balanced exposure.  In the second image, I brushed the flower with flash-light while John held the moonshade umbrella overhead. 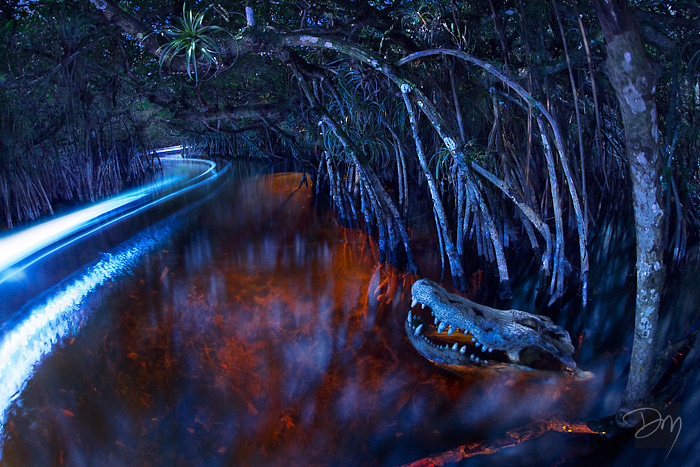 This fantasy image took three trips to a remote spot in the Everglades, two foolish photographers, six hours of standing chest deep in alligator-rich waters at night, a giant alligator skull, and many trials using an invented fan of light mounted on a kayak to create the S-curve and soft light bath of on the mangrove tunnel during a long exposure.  I call it Magical Moonlight Paddle. 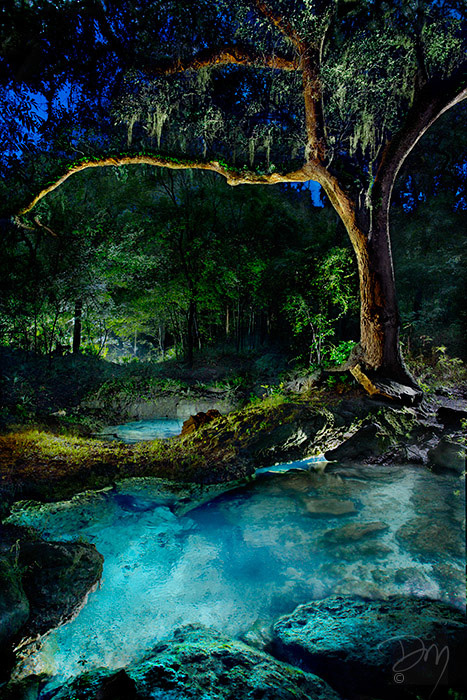 Oasis in the Dark

Another collaboration, Oasis in the Dark, is presently being featured as the 32nd year poster image for the WUFT's fundraising drive (NPR in Gainesville).  This is a spring along the Suwannee River. Since John and I each set up our own cameras and do our own processing, our photos are similar, but never the same.  We have artistic license to emphasize different aspects. Above is my version of the poster photo. You can see John's version on the poster here. 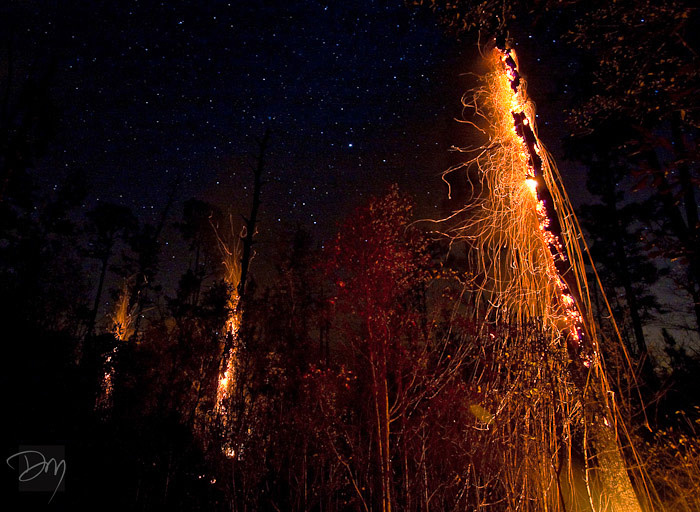 Forest Fire Under the CosmosStanding among the smoldering coals and ash on this cold February night, the scene was surreal as fireworks whirled off the roman-candle-trees still aflame. The sky was ink black but for the dazzling show of stars.

Once in a great while, one can stumble on a dramatic night scene doing its own light painting. Already late at night, and bone-weary from a long day, we passed by this dwindling (sort of) controlled burn along a remote Blackwater National Forest road... And turned around.  Luckily we had two vehicles since we'd been paddling, so our wifes could return to camp and retire (while mumbling, "crazy photographers".) Wading gingerly through the ashes and coals to the visible "hot spots", there before us were these towering Roman candles standing in the star-filled sky. No amount of tiredness could extinguish the thrill sparked by such a scene. 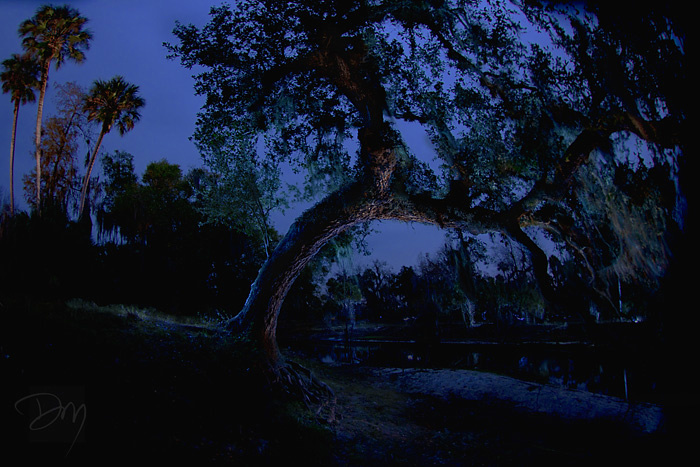 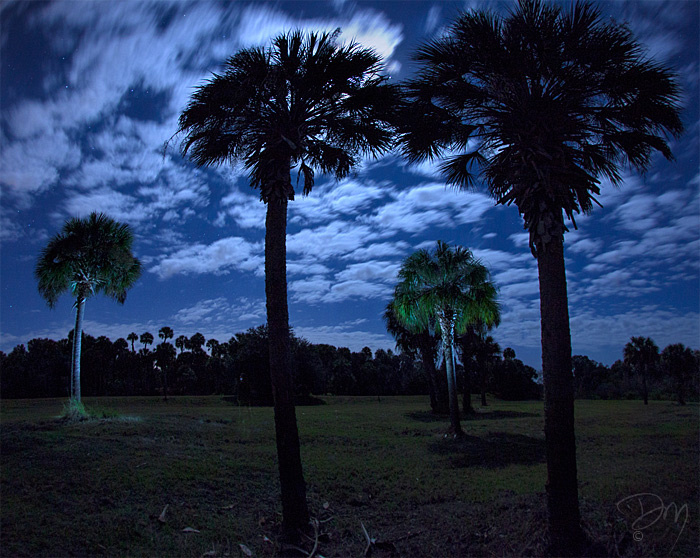 The Peace River -- with its palms, white sandbars, and majestic oaks --has been one of my favorite places to river camp since the 1970s.  On a full moon trip in 2011, we spent as much time paddling by moonlight as we did day paddling.  We did stop to camp and make a couple simpler nightscapes.

On another trip in Florida...  if you are lucky enough to find yourself standing in knee-deep placid water among dozens of large alligators, all it takes is the flash on the camera to make their eyes light up.  Although a bit unnerving at first, I soon felt comfortable as the gators preferred to keep their distance and spooked easily from any sudden movement.  After awhile, they might have even seemed curious about these popping flashes... not camera-shy at all. 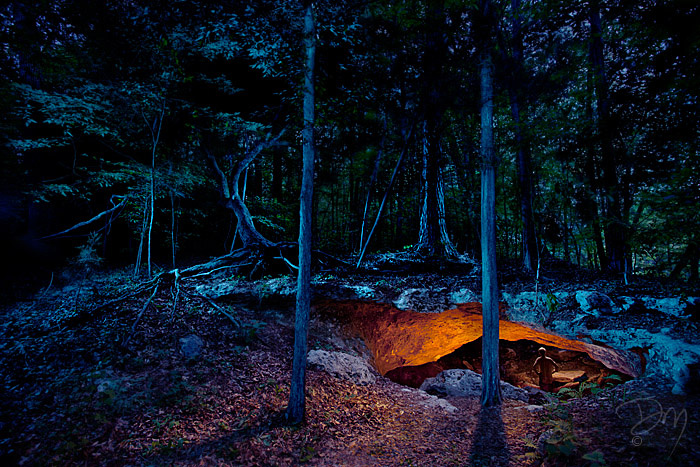 The mouths of caves conjure up prehistoric (or Tom Sawyerish) kind of feelings.  There's nothing better than light painting to manifest that sense of mystery through a creative photo.  Fire glow feigns "Safety" in the primitive shelter, while eyes glow in the rocky recesses and forest surrounds.  The stuff of Halloween. 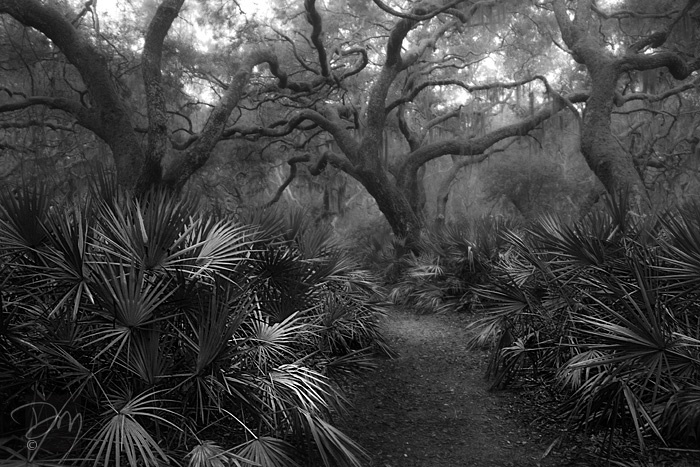 Shooting in the dark without lights can be fruitful as well. With a misty rain wetting the maritime hammock, a long exposure can turn up an amazing amount of detail, add a soft glow, and accentuate any shiny leaves.  This is pre-dawn on Cumberland Island, GA.  I used my flashlight only to help focus, then shot in the dark. 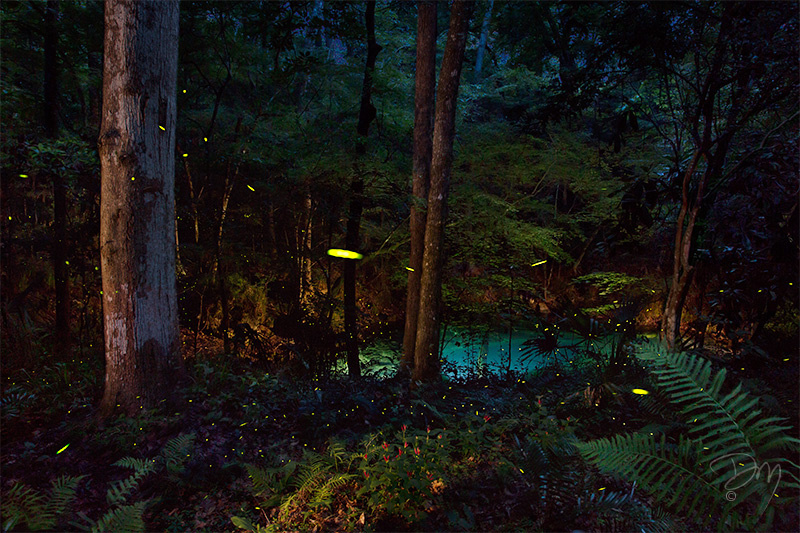 My most recent nightscape, another solo effort, Firefly Magic Round the Sinkhole you may have seen in an earlier post.  With such complex light painting, it took three nights to get it right and learn methods for running both camera and lighting. (Imagine getting down the 20 foot steep rocky bank to shine underwater flashlights while the camera timer is ticking. Even with an intervalometer making a series of exposures, my lighting was hit-and-miss... but hit enough times.) The first success was making it through the evenings uninjured. The fireflies were so numerous this past May, they inspired me to try... compelled me to keep trying. 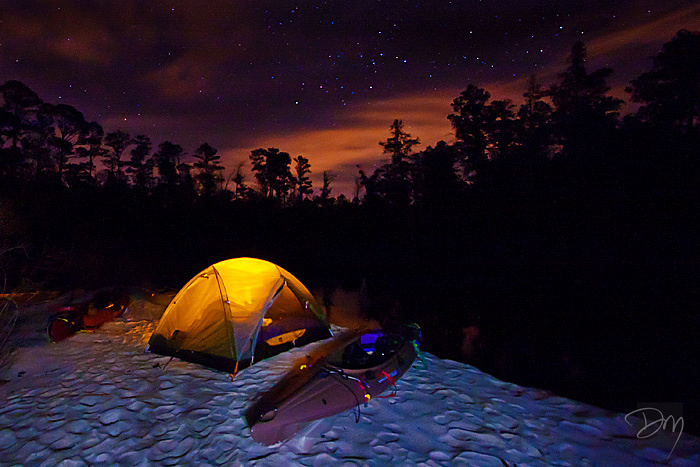 It was hard to choose which images to post here, and to keep the behind-the-scenes stories to a reasonable length, but I'm sleepy and ready to turn in. There are more in the making as well , so keep an eye on my Facebook page and/or website.  Good Night and Well-lit Dreams!