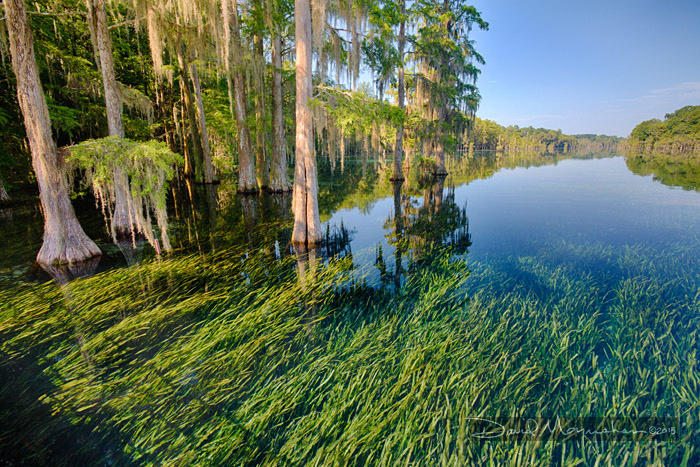 Merritt's Mill Pond, Before the Drawdown 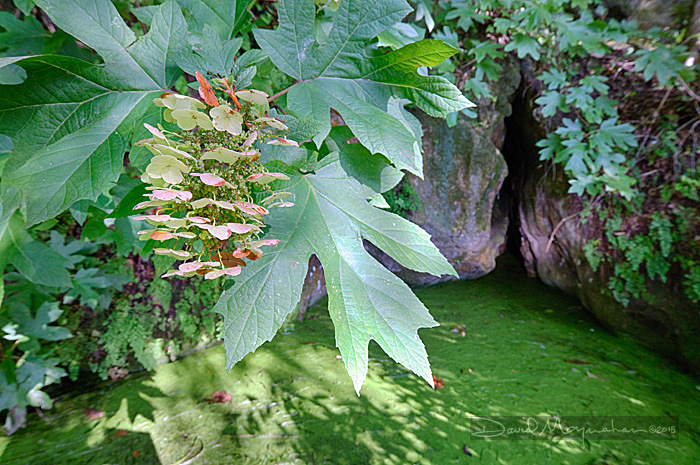 Gator Hole Spring, Before the Drawdown

Merritts Mill Pond, a spring-fed dammed lake near Marianna FL, was "drawn down" for maintenance and repair at the headspring, Jackson Blue.  This only happens once every 50 years or so.  The Pond water level was lowered 6 feet or more -- quite an opportunity "to see what's underwater" without actually diving.  One of the springs, Gator Hole, had become a large partially-out-of-water cave into which adventurous folks could actually paddle part way.  And from there, one could wade in the crystal clear knee-deep waters and explore the many nooks, crannies, and side tunnels.  After seeing some photos on FB (Thanks Giedra Mazelyte and Guy Bryant), we were intrigued, and then hearing the Pond would be refilled very soon, Crystal and I decided to try to see it. We got there just in time - they began refilling it a couple days later. 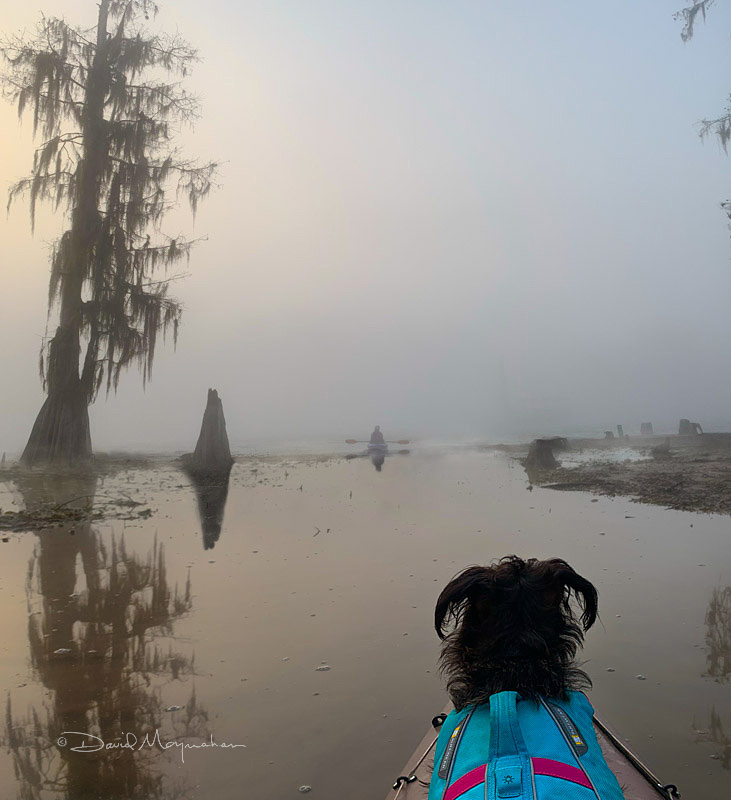 Scruff is keeping a close eye on Crystal as she fades into the whiteout. Meanwhile, we're struggling in the 1 1/2 inch deep water.

As a safeguard during the pandemic, we decided to be there at dawn on a weekday in hopes of having the caves to ourselves for a couple hours. We didn't anticipate the entire area (and Pond) being socked in by dense fog... and, as a result, never saw another soul on the entire Pond all morning.  We launched before sunrise, wading through some mud, and then struggling to get our kayaks into deep enough water to float, but soon enough we were afloat and shrouded in beauty. Our scout, Scruff, was on high alert in the front of my boat. 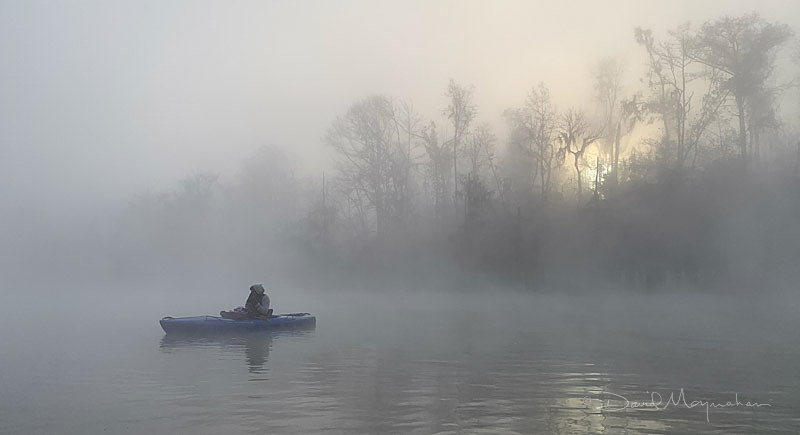 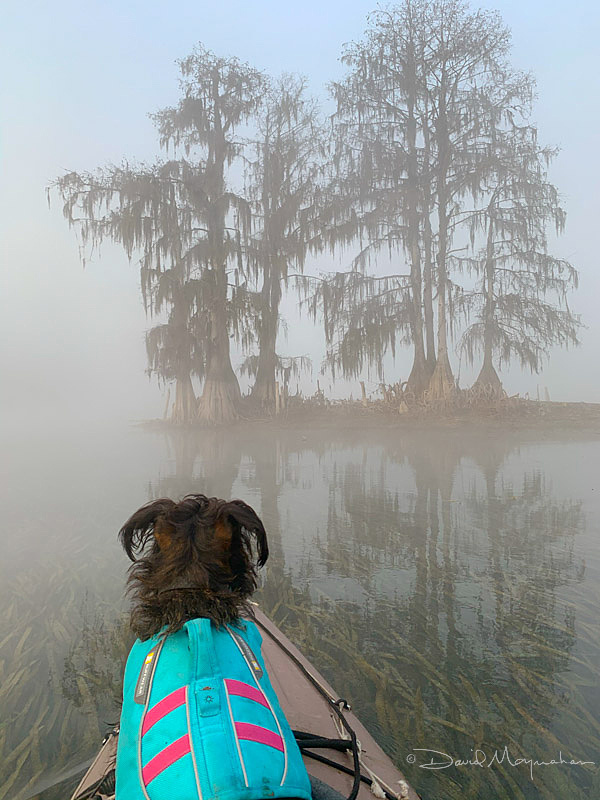 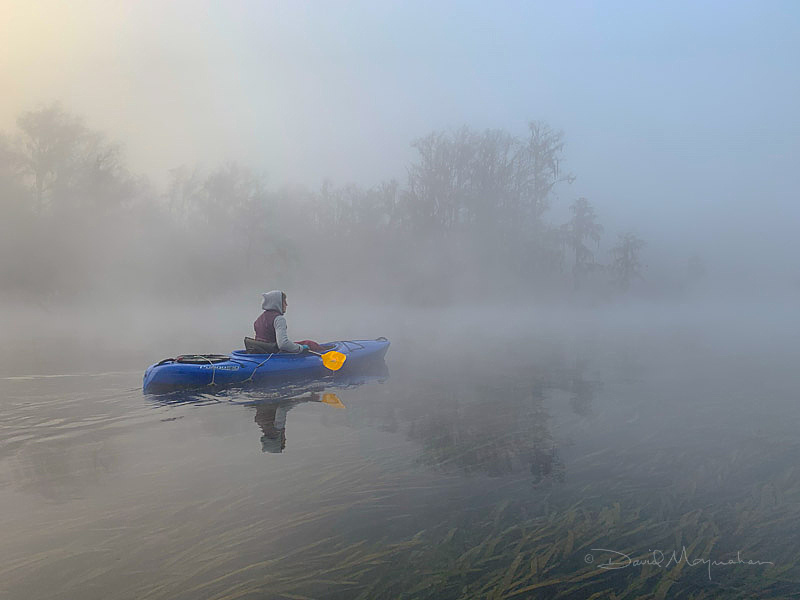 Friend, John Moran, had given us some landmarks for finding the cave entrance. Oops, the landmarks were lost in the fog.  But we had a good general idea of where it was, and my GPS, which didn't mind the fog one bit, soon had the cave pinpointed. 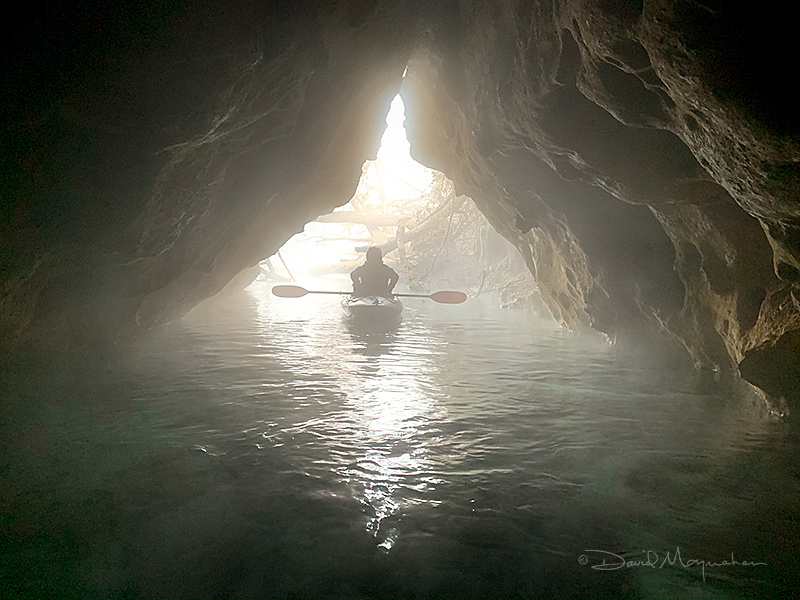 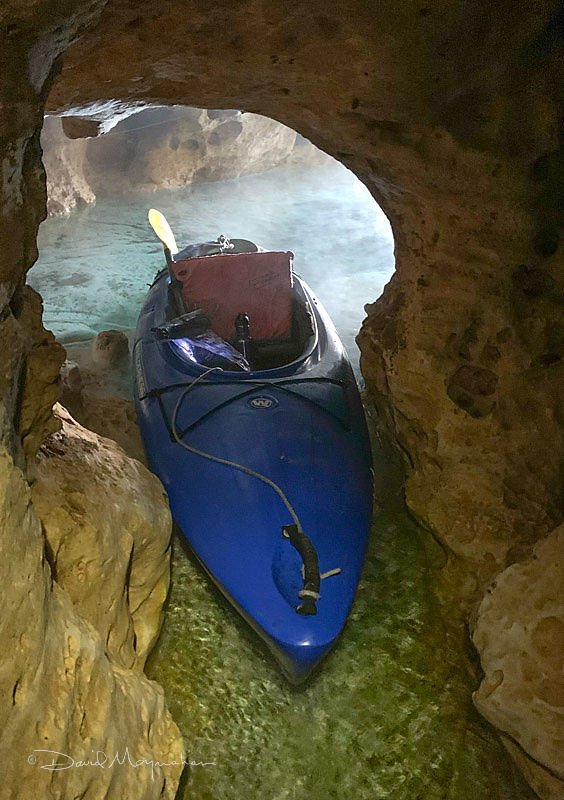 Fog swirled around us as we floated into the tunnel. Fifty feet in, we secured our boats and proceeded into the alluring dark stony holes by flashlight. We set Scruff atop a large flat stalagmite as sentinel. (Honestly, he would have had to swim in many spots and soon we'd have a miserable shivering doggie on our hands. He sensed that his post was the safest place to keep his eye/ear on us and remained relatively content for a couple hours.) 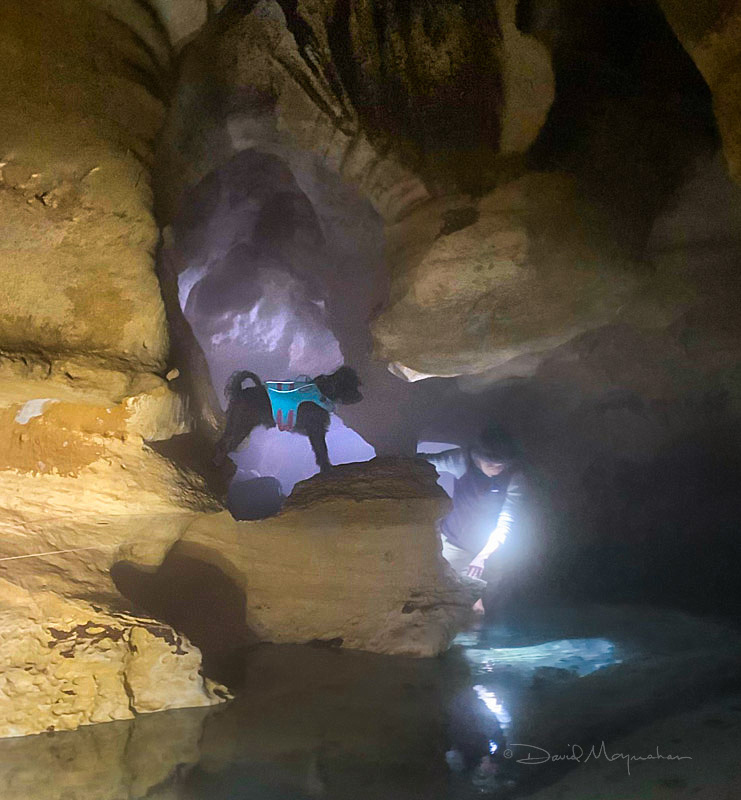 We were out to have fun more than to make photos, so without much gear to lug around, we spent most of our time just exploring. I had brought several waterproof inflatable solar LED lamps which we placed strategically in holes in the rock walls to guide us as we ventured into the various passageways. 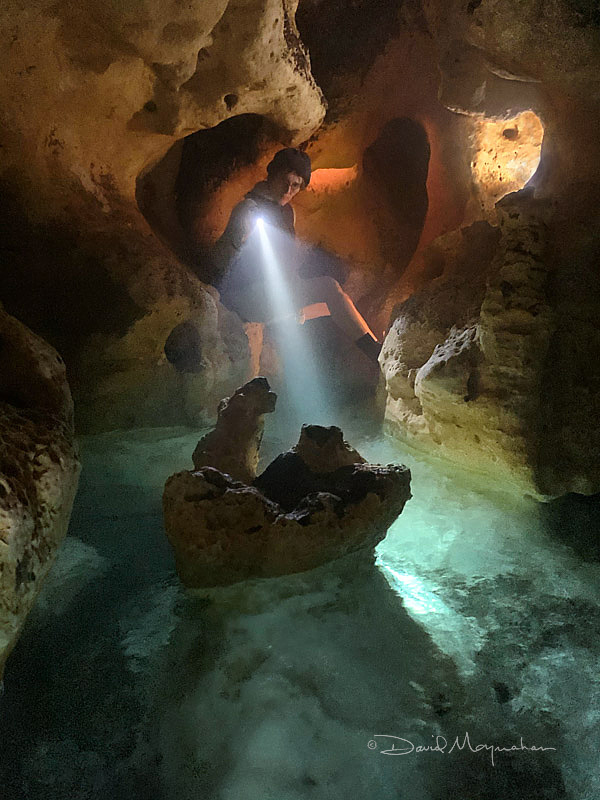 Inside the Spring Workings

But there was so much mystery in the dark recesses, the dimly lit swiss-cheese-limestone walls, and clear blue water swirling at our knees, that I made a few stabs at trying to capture the drama of it. 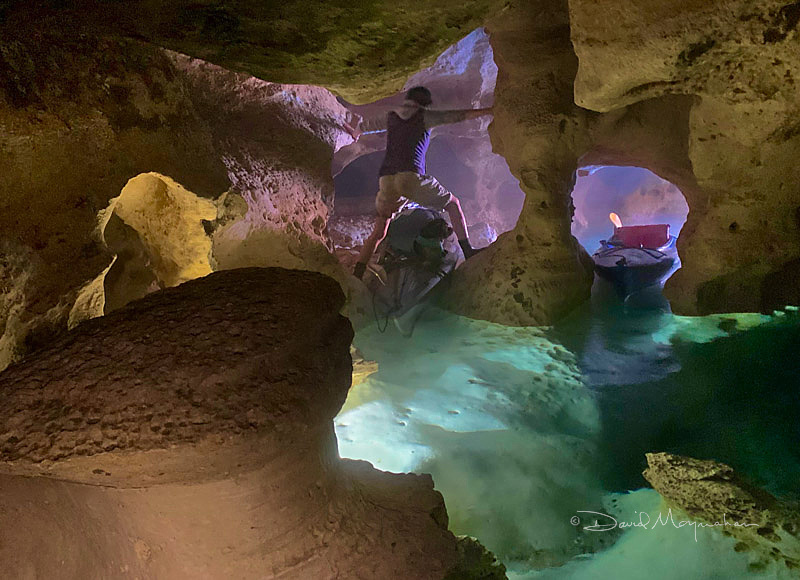 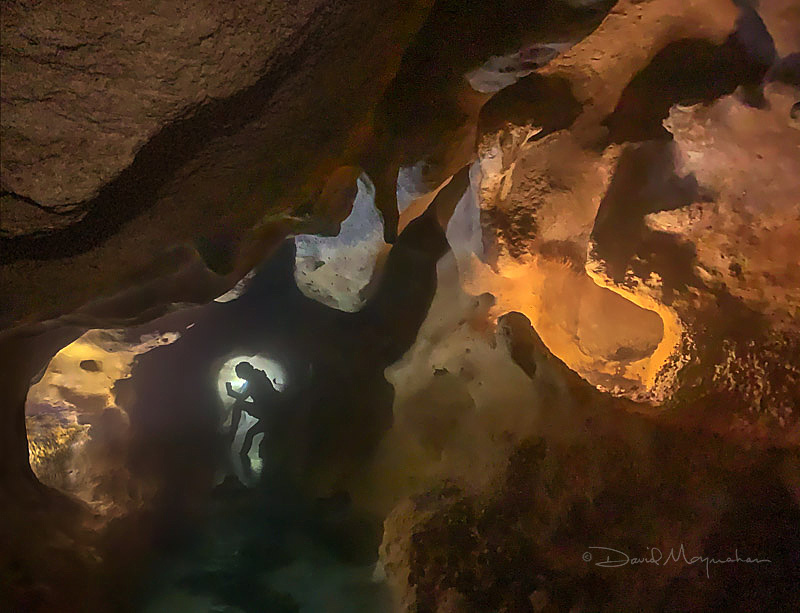 One small side tunnel led us to the deep hole from which the Aquifer gushed, and into which divers go way beyond our reach. 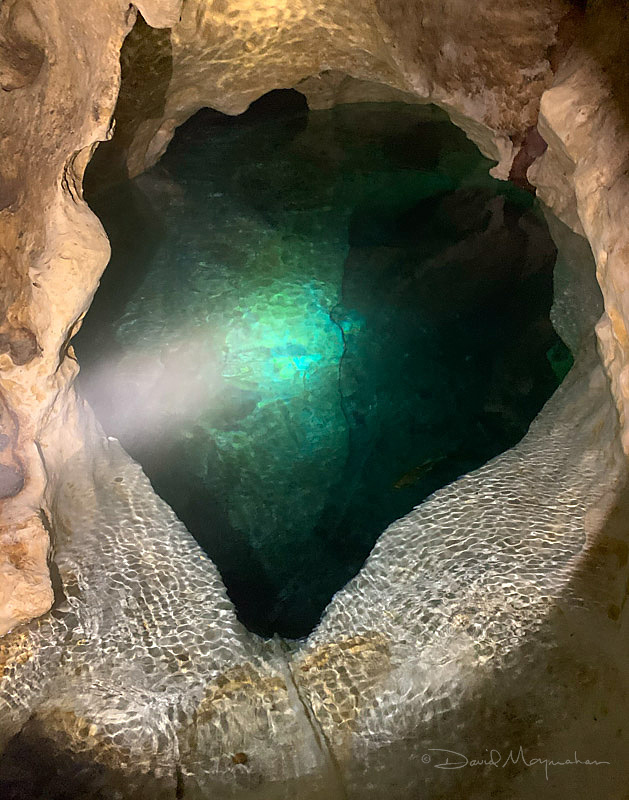 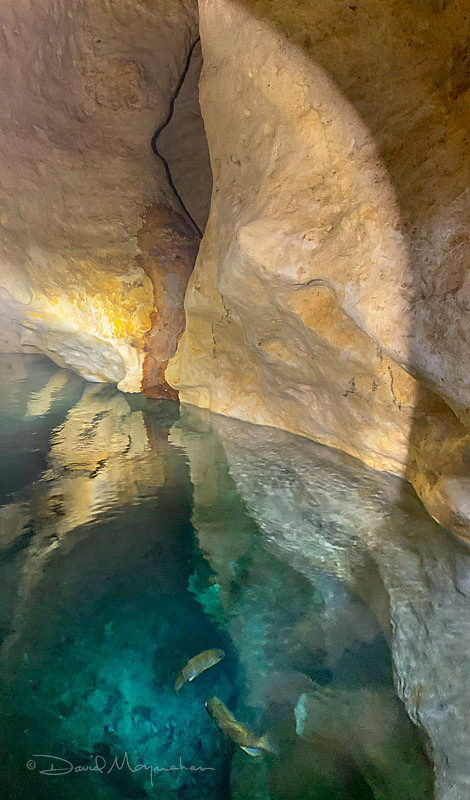 Gator Hole Denizens (No gators to be seen!)

Upon return to our boats, the sun was beaming into the entry tunnel. 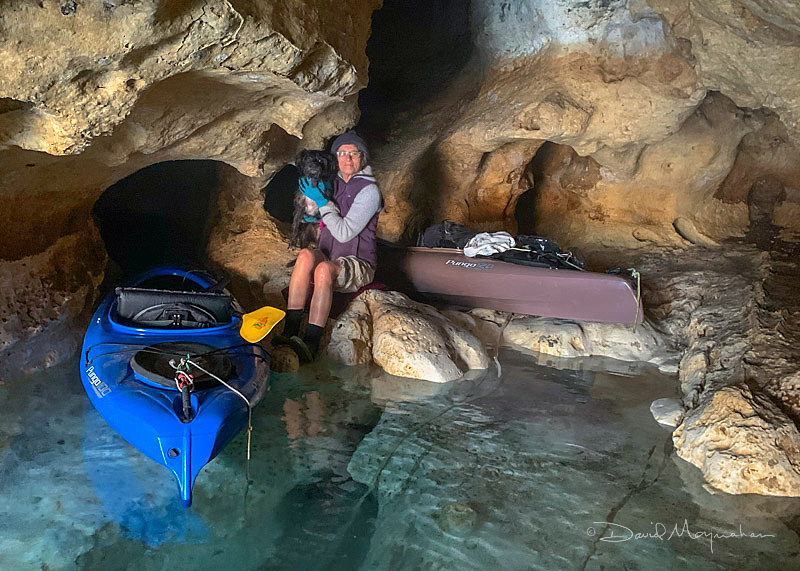 We had to back out as the channel was too narrow to turn around. 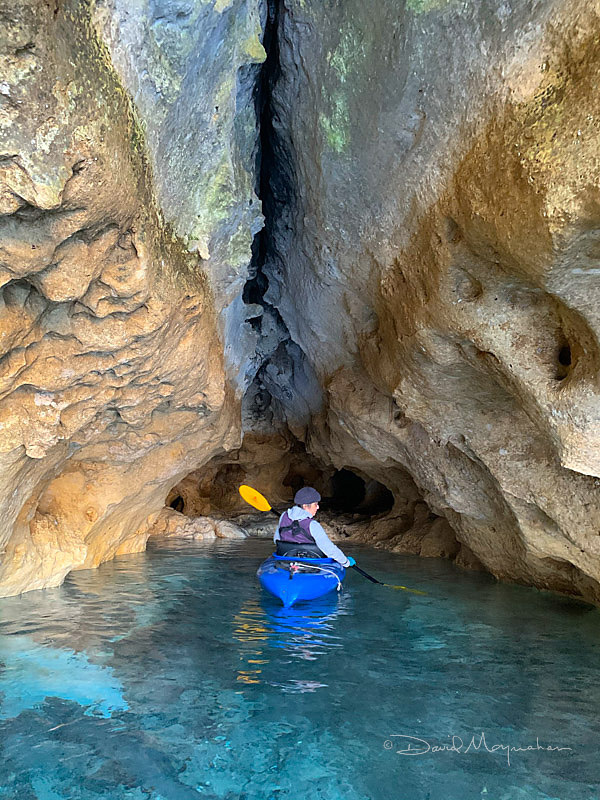 One last look at the entrance to Gator Hole, before turning out into low-water Merritts Mill Pond and its eerie skeletal tree stumps stabbing at the sky. 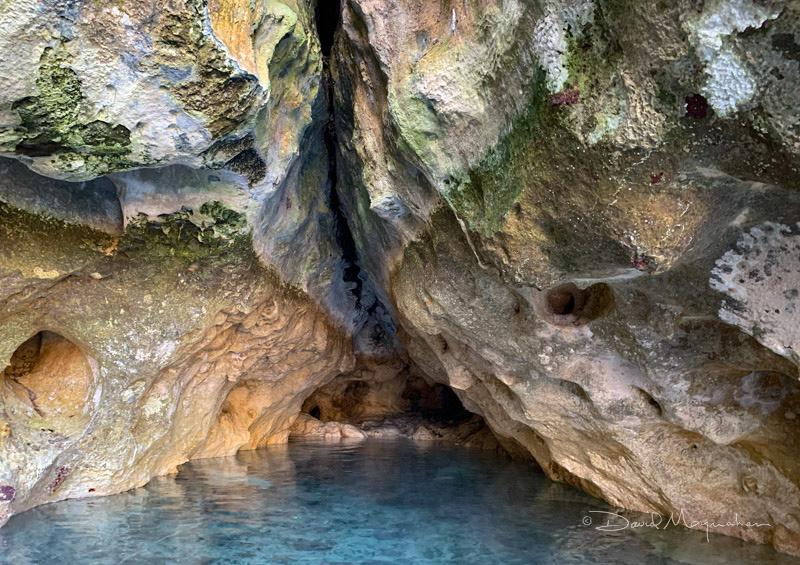 At the Mouth of Gator Hole 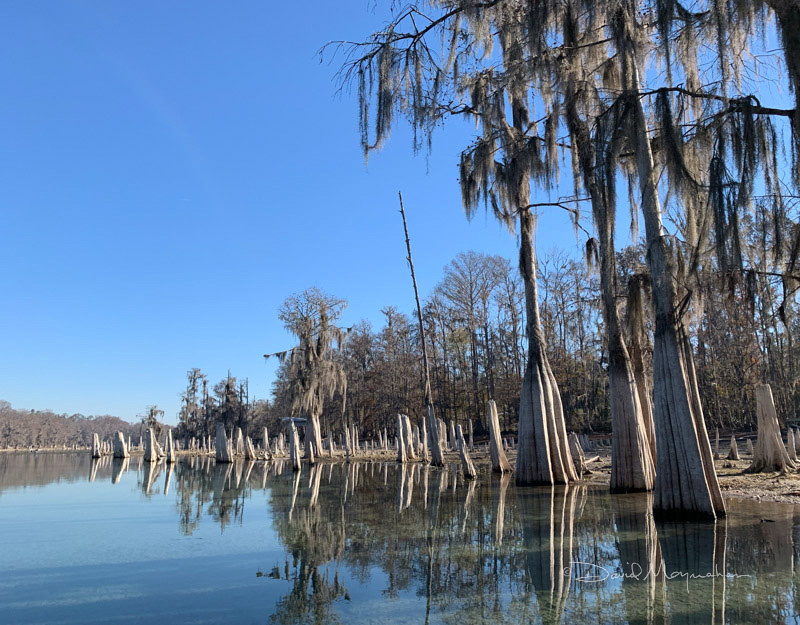 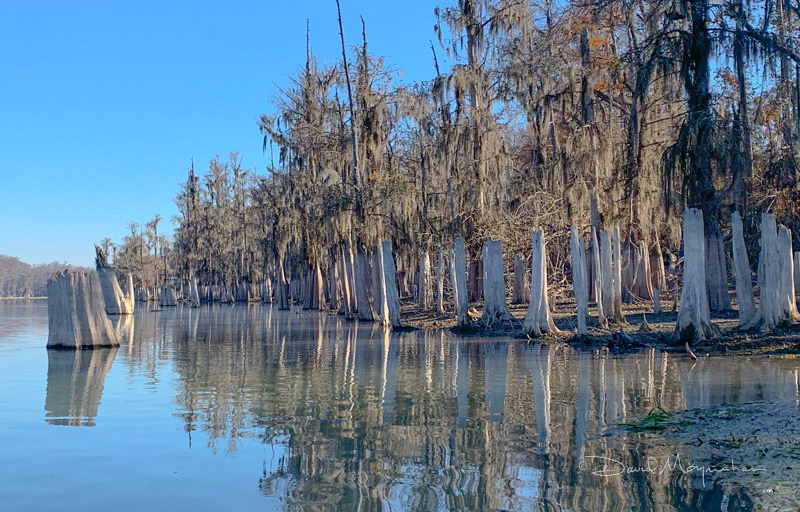 We paddled back to our launch site, gleeful in our success and giddy from the adventure.  And headed home.

I hope you enjoyed the trip into a spring cave. Please feel free to share this link. And leave a comment below - I love to read your impressions.  And may we all journey safely to the end of this pandemic... the light (vaccine) at the end of the tunnel is getting closer.

Alan Youngblood(non-registered)
Gorgeous David. I really enjoy seeing the work. Inner Springs is such a strong image. They all are. I appreciate being on this list. Thanks for including me.
Jack and Dorothy(non-registered)
Thanks for taking us along with you on your adventure! We all need that during this time of isolation.
I gave us a chance to share your wonder and hope that things are going to get better!
Tara Tanaka(non-registered)
I dived the springs of Merritt's Mill Pond for years, but never dived Gator Hole - it's at least as beautiful as all the others! I especially love your "Inner Springs" image - "The Birth of an Explorer". Thank you once again for sharing your adventures with us.
Rebecca F Miller(non-registered)
You guys are impressive explorers. I love seeing Scruffy on high alert! What an amazing adventure!!
Sandy(non-registered)
Cool images. Probably wasn't easy exploring but easier than if it was submerged. Thanks for sharing images of rare these occurrences.
No comments posted.
Loading...
Subscribe
RSS
Recent Posts
The Great Conjunction of 2020 - Solstice Star Spelunking a Spring Adventures in Search of Gander Spring Favorites Art & Artifacts of St Vincent Island Bahamas Fisheating Creek Maine Rocks Suwannee Spring Illuminations Tallahassee Museum & the New Snake Digs
Keywords
Florida David Moynahan Photography nature photography night photography underwater photography nightscape spring Wakulla County paddling cypress
Archive
January February March April May June July August September October November December
© David Moynahan Photography
Powered by ZENFOLIO User Agreement
Cancel
Continue