As a boy in South Florida, I nearly forgot the time my dad pointed out the Milky Way while camping far from city lights.  And in my young adulthood, I can only remember seeing this celestial wonder when camping out west, so it's no wonder it didn't occur to me that I might be able to photograph it here until recently when I started seeing occasional Florida Milky Way shots online.  Even then, I assumed it required special equipment, technique, and timing. Last month, I finally got around to investigating these challenges.

With the improved sensors in modern digital cameras, shooting at night has become much easier.  As you know, I've been playing with light painting and nightscapes for some years.  Equipment? Check.  A little online research -- lots of info out there -- suggested the technique is fairly straightforward. That left timing. Sure enough, timing is critical. It so happened that I was in the midst of the right season, and even the right time of month to see the Milky Way in North Florida.

With that revelation, I grabbed my camera and went looking for a nearby view of a big southern sky to make a test shot.  The conditions at the Wakulla River were far from ideal - cars whizzing by, light pollution from the town of St. Marks to the south - but, there it was. I could faintly see the Milky Way.  And to my astonishment, my camera's sensor could see it far better than I could. 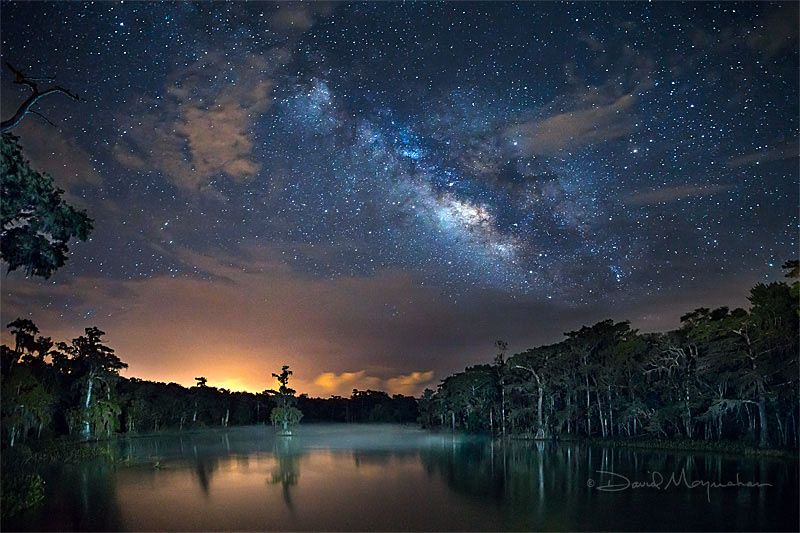 Whoa. Really?!  I was pretty blown away. There were only a few MW-potential nights remaining in the moon cycle, and most of them were to be foiled by rain and overcast skies.  But I determined to take every opportunity to make more trials.

I wouldn't normally present my "learning curve" work in this blog, nor do I like so much redundancy in photos presented in one post.  But, I confess, I was thrilled with the results of my clumsy first efforts (and even more excited to learn that dramatic Milky Way shots are within my purview)  so I'm throwing those rules out the window and showing you my first four successful attempts.  Hopefully one day I'll have a more masterful piece to show you, and look back on this post and smile. But this is part of the journey, maybe even my favorite part. 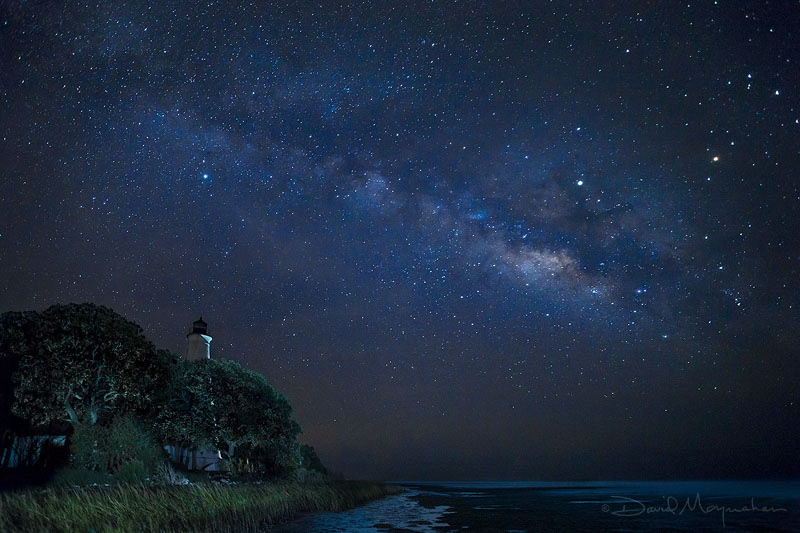 Beacon in the Cosmos

Beacon in the Cosmos

This night's forecast and radar called for clouds and scattered storms, but I was out shooting and scouting at St Marks, and watched the southern sky gradually clear. Hermit crabs kept pinching my toes through my Crocs in the shallows where I had waded out to set up my tripod for the first St. Marks Lighthouse composition.  My calculation was that, from where I stood, the MW would be just over the lighthouse and the softly lit Gulf waters would nicely frame my composition in about an hour.  Then I waited for darkness.  It came much later than I expected.  Sometime after 10 PM, the sky finally darkened enough to see the core of our galaxy, but by then, it had moved too far south (right) for my composition.  And the tide had fallen so my soft Gulf waters turned partly to dark muddy flats.  Oops. I had to move and re-compose.  Composing in the dark is not so easy. 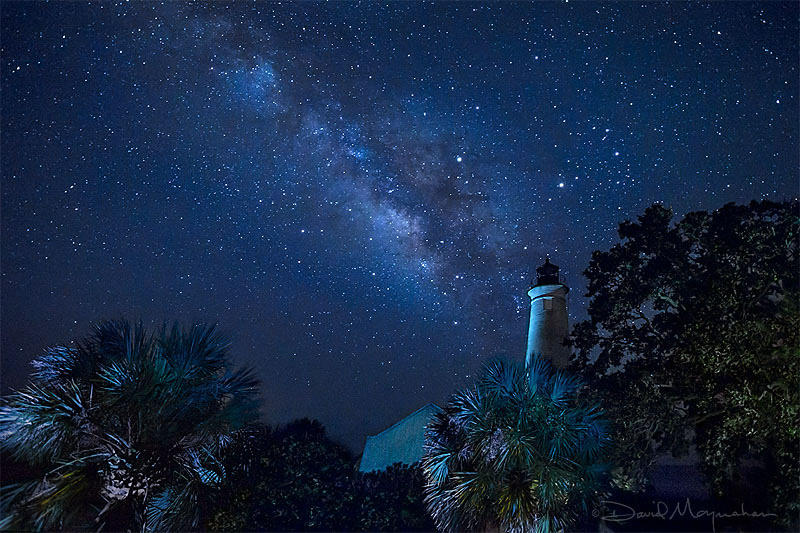 Since I had a clear night, I decided to try a second shot. From the viewing tower beside the lighthouse, I could frame both the MW and lighthouse but the platform roof kept slicing part of the sky from the frame.  The viewfinder is essentially black after dark, so each move required a lot of trial and error. Mostly error. I didn't have the right tools to secure my tripod and nearly lost the whole rig over the side. Ultimately, I had to compromise my composition in order to be safe, but I did succeed in getting rid of that pesky ceiling in the shot. 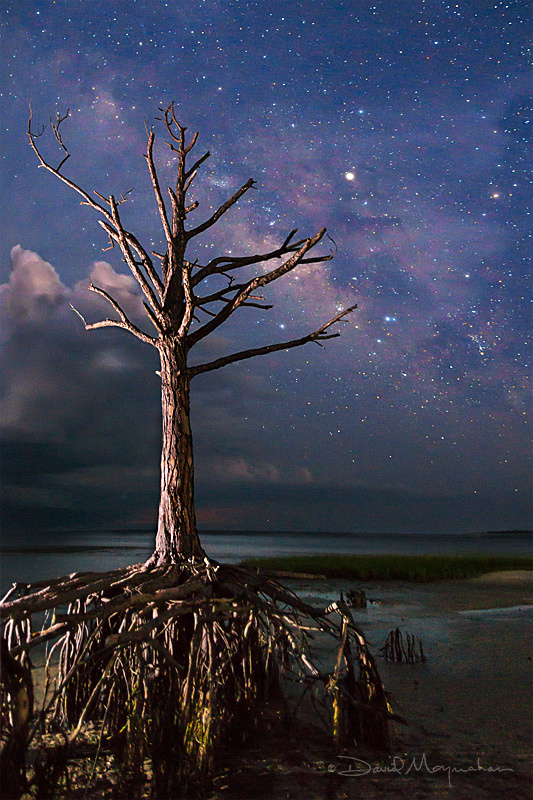 On another iffy night, I headed to Mashes Sands with a beautiful dead tree in mind. When I arrived, an active thunderstorm raged out in the Gulf, distracting me for a half hour, but I just couldn't catch the lightning in my frame. When I finally got to my snag after sunset, I expected the low tide to be lower. Trying to set up in two feet of flowing water, I came to realize my composition was not going to work.  Mike Riffle had driven down to meet me there.  He had thought I meant a different dead tree and wondered where I was.  So, once again, by the time we both arrived at the stilted pine snag he had chosen, it was nearly dark (except for distant flashes of lightning).  We were making some test shots and playing with light painting the tree as a huge unanticipated storm hurled at us from the northeast.  Nearly every long exposure was spoiled by a blast or two of lightning, and the storm quickly forced us to scramble out of there just before the deluge.  I was amazed that I got one frame where enough elements came together for a presentable photo.

That's a lot more writing than I usually throw at you, but I wanted you to be able to get a taste of how it goes.  I didn't mention the mosquitoes, or stubbing toes on roots and rocks, or nearly dropping my lens into the sand.... but you get the drift.   We live in a glorious natural world, by day and night.  Nature is the medicine we all need to help balance and lend perspective to the stress and grind and fear that seem to come at us each day.  I encourage you to get out in it for plenty of first hand healing.

Addendum: Just got back some test prints and they look good, so prints can be made!

Cynthia J Kelly Schuster(non-registered)
Thanks, beautiful pictures capturing my wonderful state
michele(non-registered)
I know this may sound silly but I would like to say thank you for post on the florida MW. you see, in 2018 my father in law one of the greatest souls the world has ever been blessed with, gave me a new camera for my birthday. A new Sony A7III and its my baby. I love it. He knew i wanted to go to west and shoot the MW. Sadly and it still punches me my heart and my throat swells, he died just a few weeks later. A few weeks later Hurricane Michael hit and my family had majors losses to include life during that time. I know I don't have to explain any of that. Well, I stopped taking photographs with that camera or any really until a few days ago. I was forced by work to get a new Fuji xti IR so messing around with that made me reach for my Sony. I was just sitting here feeling sad because of all my loss and because of the finances it will be years before I can head west to shoot the MW. But I looked up Florida MW and saw your photographs, and I almost cried and saw it was possible. So as silly as it sounds, please know you have made a difference in someone's world. thank you
Brian Jewell(non-registered)
This is some of the most beautiful shots of the night sky I've ever seen, and I never would have thought, Florida
Joney(non-registered)
WOW! and WOW! again....
Anna Lee(non-registered)
Wow! Surreal beauty. Thank you, David.
No comments posted.
Loading...
Subscribe
RSS
Recent Posts
The Great Conjunction of 2020 - Solstice Star Spelunking a Spring Adventures in Search of Gander Spring Favorites Art & Artifacts of St Vincent Island Bahamas Fisheating Creek Maine Rocks Suwannee Spring Illuminations Tallahassee Museum & the New Snake Digs
Keywords
Florida David Moynahan Photography nature photography night photography underwater photography nightscape spring Wakulla County paddling cypress
Archive
January February March April May June July August September October November December
© David Moynahan Photography
Powered by ZENFOLIO User Agreement
Cancel
Continue