Thanks for visiting my blog. This is my very first entry in this new format.  At my old Blogger site, you may find about 100 posts from the past 7 years, all filled with adventures about making my photos.  Check them out here: http://davidmoynahan.blogspot.com/.  My website is in transition to a "new & improved" version, but for now most of my work can be found at davidmoynahan.com. 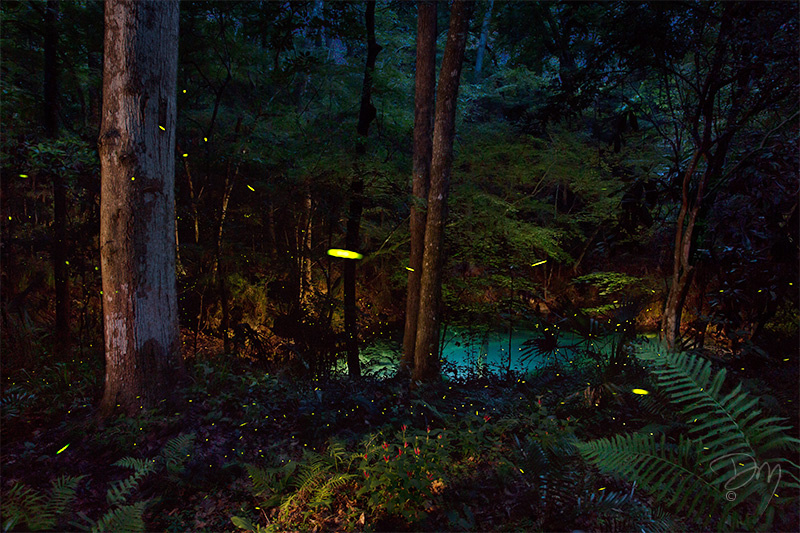 Arriving home just after dusk from an event at Wakulla Springs last week, I was awestruck by the firefly show happening in the woods next to where I park my car.  Having never tried to photograph lightning bugs before, I decided to see what I could get.  Setting up my camera and tripod, I used a flashlight to focus on a tree in the direction of the most concentrated fireflies, dialed in a 30 second exposure at a high ISO and held my breath.  I got the image  below. Wow, I thought, this has potential! 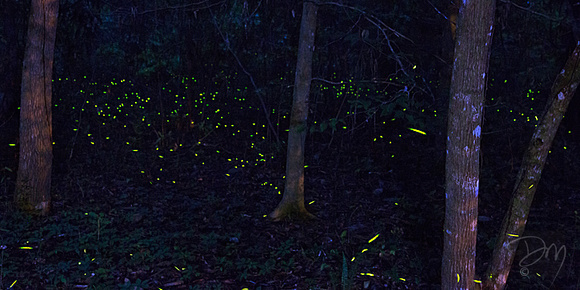 So far so good.  Now I needed to find a good composition with fireflies in it. The woods -- full of lightning bugs -- are generally also full of underbrush and just not much to look at.  And  I discovered that the more I used my flashlight, the more the fireflies moved away. I finally wandered around to the other side of the house to the woodsy bank of the sinkhole. Voila! A gorgeous scene with lots of fireflies.

The next night, I set up BEFORE dark so I could fine tune my composition and pre-focus to minimize use of a flashlight.  Crystal was willing to keep the house mostly-dark. (It was close enough to "light pollute" my photo.)  The fireflies were great, but the image behind them turned out too dark and flat.  So the third night, I set up again in about the same spot, but this time I used the flashlight A LOT!  During a series of long exposures over a couple hours, I used the flashlight to "paint" light on the trees, the ground, and even underwater in the sinkhole.

How did I light the sinkhole, you ask?  Well, it wasn't easy.  I had the camera set on an intervalometer to shoot ten sequential long exposures with 15 second spaces between shots while I ran around to the dark stony path down to the water. I couldn't tell when the camera was shooting (since I failed to synchronize a timer), so I just slipped around on the rocks and often muddy shoreline in the dark (... I didn't want extraneous light in the frames) and only turned on the light when I could hold it underwater. I stumbled into waist-deep water only once.  No bruises, no complete submersions.  Not bad.  Out of the ten exposures, several were black, most were useless, but a few hit the mark.

Since the camera was fixed in position to shoot the same scene over and over, I could layer the shots together to combine all the light painting I had done in the sequence into my final image.  When I finally got all the parts layered in -- a long careful process -- I was thrilled by how well the image captured the magic of the moment.

Fireflies dance and flash and mate around the banks of our sinkhole,  and in the wooded areas all around North Florida most every summer evening, but seldom do I take the time to go outside and appreciate them, much less photograph them.  This year, maybe because there has been less mosquito spraying for a few years due to tighter budgets, these fairy-like creatures seem more abundant than they've been in a long time... or maybe I finally stopped long enough to become aware, and let myself be caught in their nightly magic spell.

Matthew(non-registered)
I love your work, how can I buy a print??
Jack Rudloe(non-registered)
How about trying your technique on bioluminescent jellyfish. Earlier this year there were so many sea walnuts that you could read a newspaper by one. John Moran tried it years ago, but the technology is better now. The Living Dock awaits you anytime you want to try it.
David Moynihan(non-registered)
Best photography I've ever seen. the description of the how and why is always worth the reading Thanks for that, also. One of us should learn to spell (at least our name) correctly lol.
Kellie Keys(non-registered)
David,
This is my favorite picture I've seen. Ever.
Vickie(non-registered)
I always look forward to firefly season but have seen very few this year so I thank you for sharing yours with me.
No comments posted.
Loading...
Subscribe
RSS
Recent Posts
The Great Conjunction of 2020 - Solstice Star Spelunking a Spring Adventures in Search of Gander Spring Favorites Art & Artifacts of St Vincent Island Bahamas Fisheating Creek Maine Rocks Suwannee Spring Illuminations Tallahassee Museum & the New Snake Digs
Keywords
Florida David Moynahan Photography nature photography night photography underwater photography nightscape spring Wakulla County paddling cypress
Archive
January February March April May June July August September October November December
© David Moynahan Photography
Powered by ZENFOLIO User Agreement
Cancel
Continue