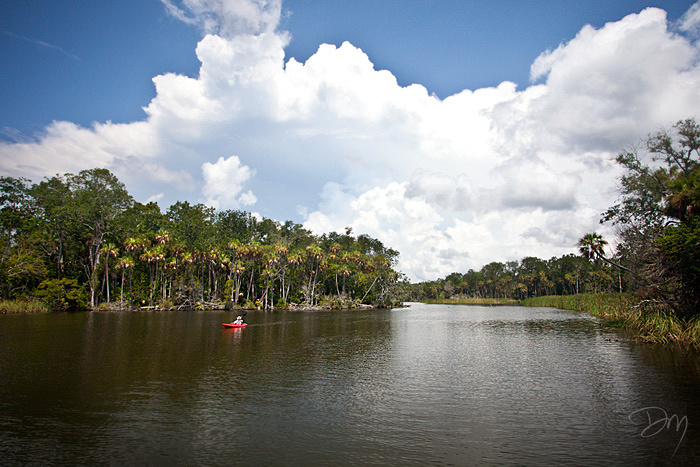 Tent camping in Florida anytime other than winter can be challengingly buggy.  Having lived in Florida my whole life, I know this, but it doesn't stop me from doing it anyway. Last time I camped at Chassahowitzka was in a mid-July and the air in places was clouded with voracious mosquitoes. Last month, when Crystal and I met our daughter and her friend there, it was biting flies -- horseflies, deer flies, yellow flies, flies with a mean bite.  That's Florida in May and June. In camp, smoke from the fire, long sleeves and pants, and a bit of bug spray kept us pretty comfy. And when hot, we headed for the cool clear springs abundant in this area where the flies were fewer (and absent underwater!).  We all had a fantastic time.  And while this was a recreational trip, I was also lucky enough to nab a few nice photos. 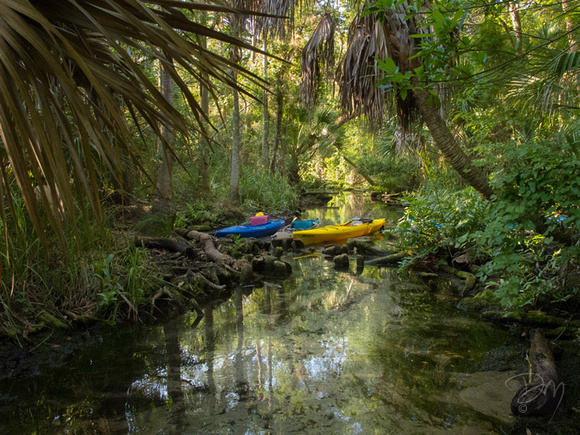 "Chaz" is really two-in-one adjoining properties -- a National Wildlife Refuge and a Florida Wildife Management Area -- a huge wild tract of forest, swamp, river, creeks, springs, coastal islands and marsh.  It is one of Florida's best kept secrets.  While there are trails, driving tours, hunting and fishing opportunities, we opted to use our kayaks to explore the area. 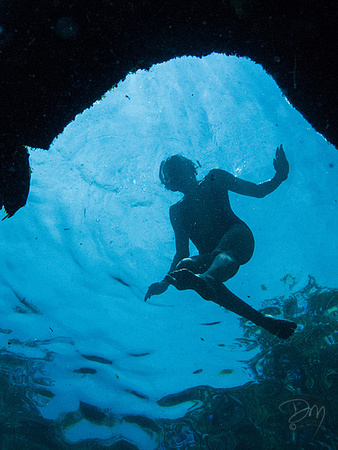 One of us said what was on all of our minds, "it's hot, so let's go find a spring".  Not far from our launch on the river (boat ramp and concession), we found this cool one riddled with caves and tunnels.  The sun was high, sending shafts of light into the holes.  Venturing into a tunnel, the view was stunning... wow! 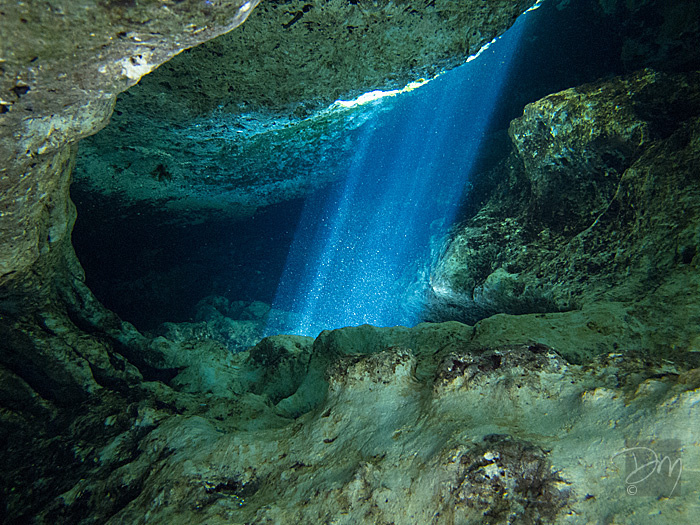 And look more closely... is that a mermaid? 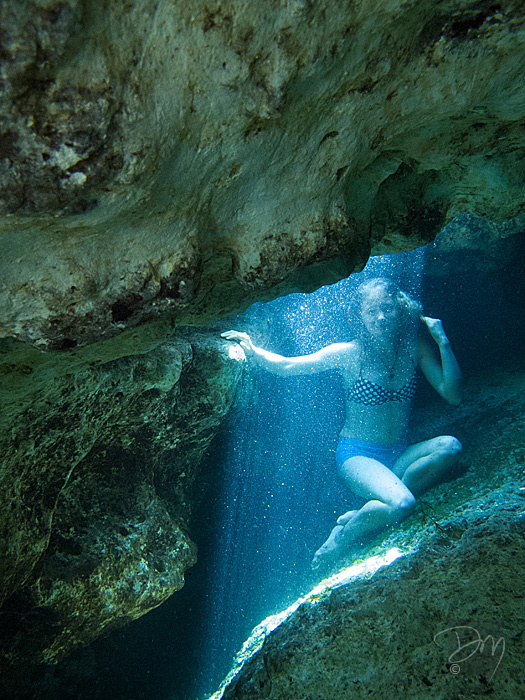 Small enticing tributaries flow into the Chaz River, each likely to have a head spring.  We had fun poking into some of these and followed a few for quite a distance, finally finding a lovely spring at the source of one creek.  The reward: a refreshing swim. 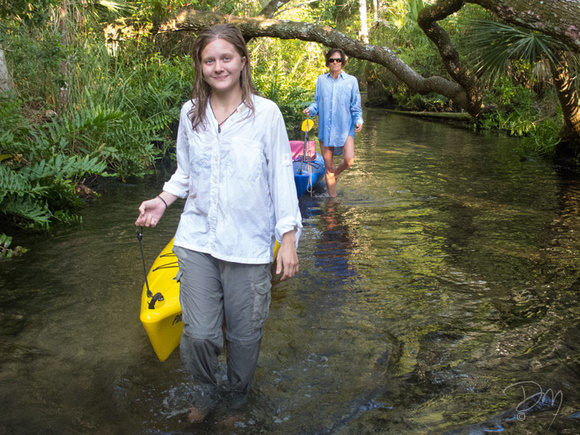 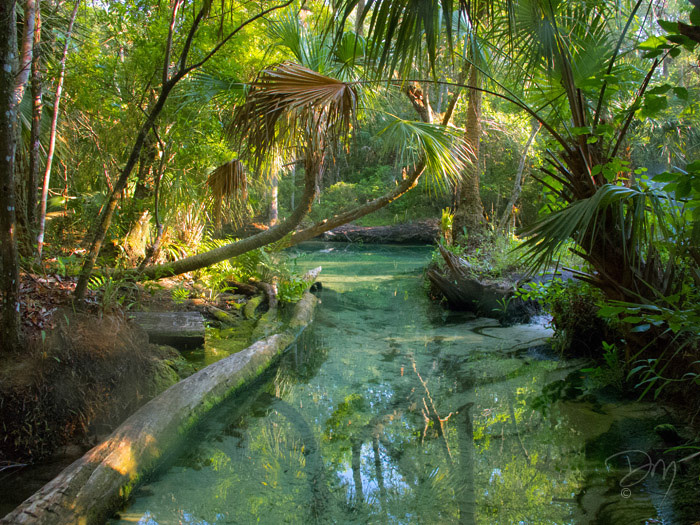 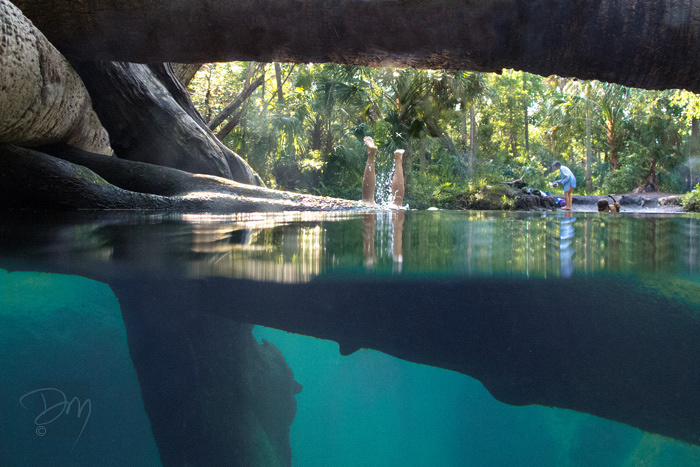 In another spring, I found a few young garfish schooling around.  With some patience and persistence, I was able to get pretty close to them with my camera. 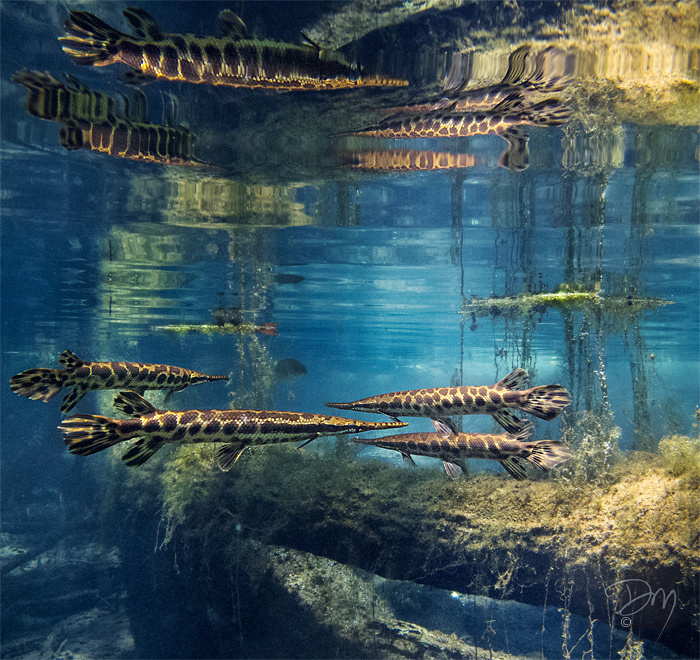 Another day, we braved the swamps on foot which it turned out had no more biting flies than our campsite (namely, plenty!).  I had crude directions to a cavernous secret spring hidden in the thick of it.  Actually, there are supposedly dozens of blue holes in this swamp, most of them windows into underground rivers making their way to the Gulf.  With muddy feet and an annoying chorus buzzing around our ears, we came to our destination -- always a bit of a surprise when following no trail in a thick swamp. 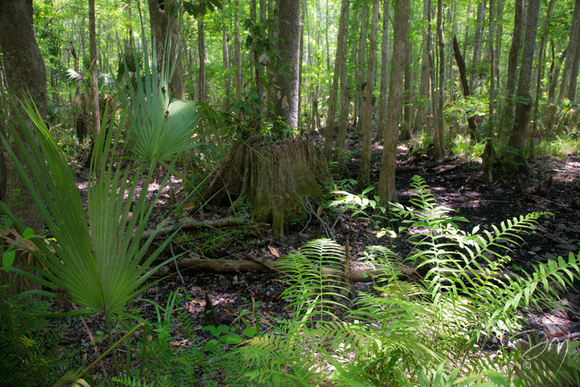 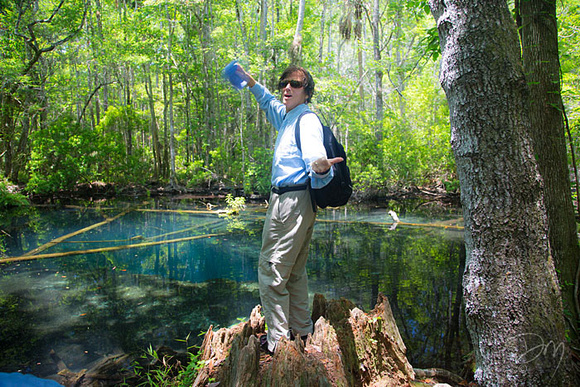 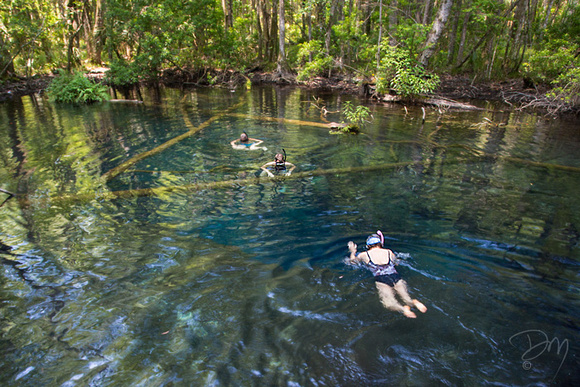 Trying to get a photo, I was NOT the first to jump in, but when someone shouted, "Alligator!", no one could have peeled down to bathing suit and grabbed mask & camera faster than I did. My last opportunity to intentionally snorkel with a gator in clear water was in the Peace River in the 1970s (and I had no underwater camera then). This alligator was no bigger than me and not acting at all aggressive, so I took a deep breath and dived as he clamored down the steep rocky wall.   I managed to get 5 photos at pretty close range.  Here's my favorite. 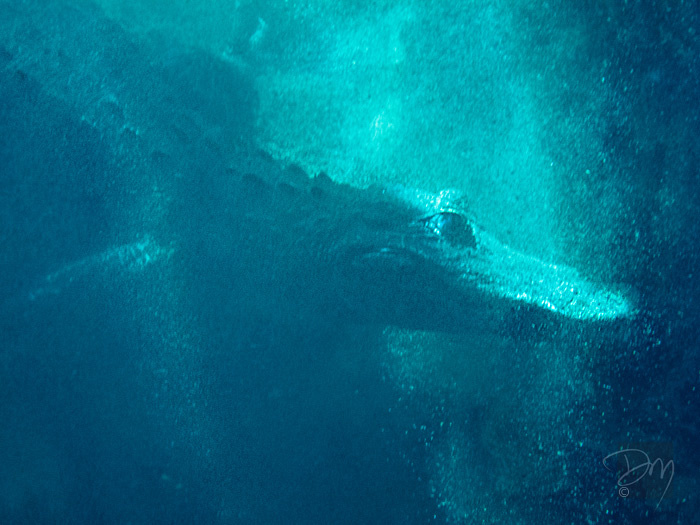 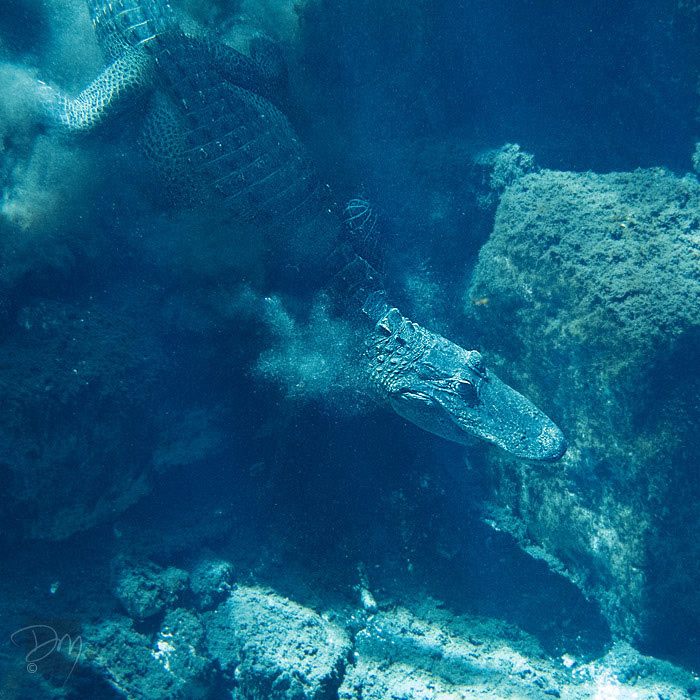 The alligator found a protective ledge with an overhang at about 25 feet down where he parked himself, head hidden in the crack and shadow.  And there he was determined to stay until the annoying intruders were gone.  We cavorted in the cool water for quite awhile, half forgetting about the gator.   Later, when we were drying off, it occurred to me that the alligator was holding his breath a mighty long time.  I looked around and there he was on the surface, finally relieved, refreshed, and glaring in our direction. Sorry, friend, that was pretty inconsiderate of us. 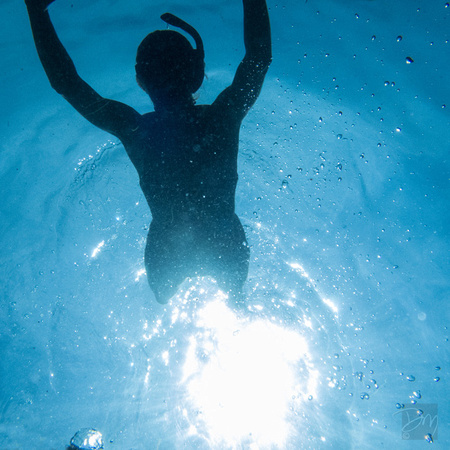 On our final day, we headed north from Chaz a short way to Crystal River. Wall-to-wall houses and development surround this part of the river and most tributaries - an entirely different world than the wild places we'd just been. Foolishly, we hoped to see a manatee.  Crystal River is renowned for its manatee population... in winter. "They're gone for the summer" was the response we got from several locals we asked. Not to worry, we packed our picnic into our kayaks and paddled the populous waterways, filled with motorboats and weekend revelers and paddlers like us. Not quite sure where we were going, we still managed to find Three Sisters Spring, one of the few undeveloped spots in the area. 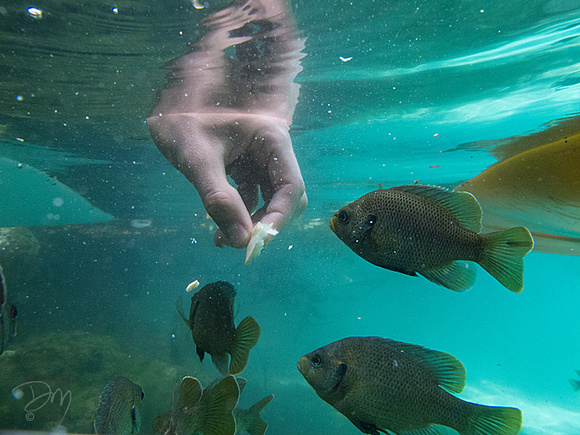 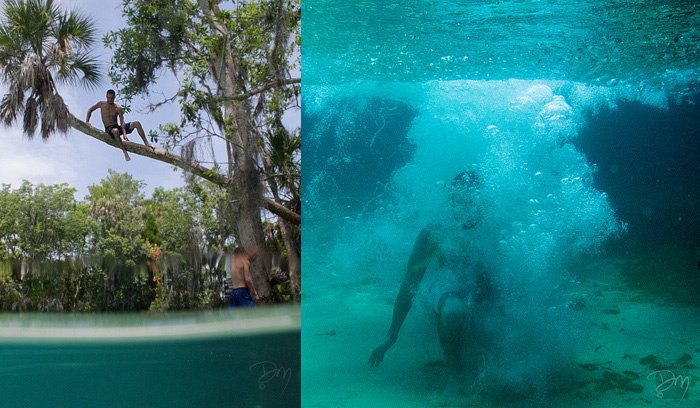 The mouth of the spring run was jammed with pontoon boats, but our kayaks slipped nicely through the narrow channel.  Three Sisters was hopping with folks on this sunny Sunday.  We joined in the frolicking, snorkeling, and picnicking in our boats.  No one is allowed on land there... not that a few locals didn't fudge a bit so they could climb and jump from a palm.  We shared our lunch with a few of the bream who were happy to be hand-fed. After a couple hours, we overheard a newly arrived couple say "manatee", and learned they'd just seen a mother and calf a short distance further up the creek from Three Sisters.  Sure enough, that's just where we found them.  What a special treat to get to swim with these gentle giant creatures as well. The curious  calf came over to check us out. 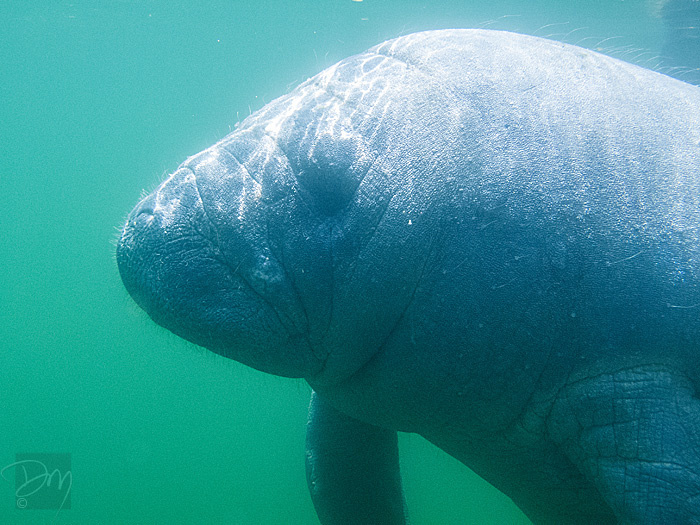 THAT is what it can be like camping in Florida in summer - a blast!   Hope to see you out there soon.

Visit website(non-registered)
Such lovely pictures, a debt of gratitude is in order for sharing this valueable blog. a debt of gratitude is in order for sharing this valueable blog. I know your field is so dangerous good luck for your adventure journey. I unpressed by your work .Thank you so much for sharing. I am totally impressed and inspired by your work. Keep it up..
Sherry Mills(non-registered)
WOW... it is always such a joy to look at your beautiful photos ... I love the REAL Florida! Thanks for sharing!!
Beverly Glazer(non-registered)
What a great adventure you all had. Don't think I could have endured the bugs but the springs looked inviting . Liked lots of the photos especially the 2 deserted kayaks and the gator
[email protected](non-registered)
Outstanding! That first gator shot is my favorite, a really wonderful shot full of suspense.
No comments posted.
Loading...
Subscribe
RSS
Recent Posts
The Great Conjunction of 2020 - Solstice Star Spelunking a Spring Adventures in Search of Gander Spring Favorites Art & Artifacts of St Vincent Island Bahamas Fisheating Creek Maine Rocks Suwannee Spring Illuminations Tallahassee Museum & the New Snake Digs
Keywords
Florida David Moynahan Photography nature photography night photography underwater photography nightscape spring Wakulla County paddling cypress
Archive
January February March April May June July August September October November December
© David Moynahan Photography
Powered by ZENFOLIO User Agreement
Cancel
Continue