Of Rainbows and Lambs 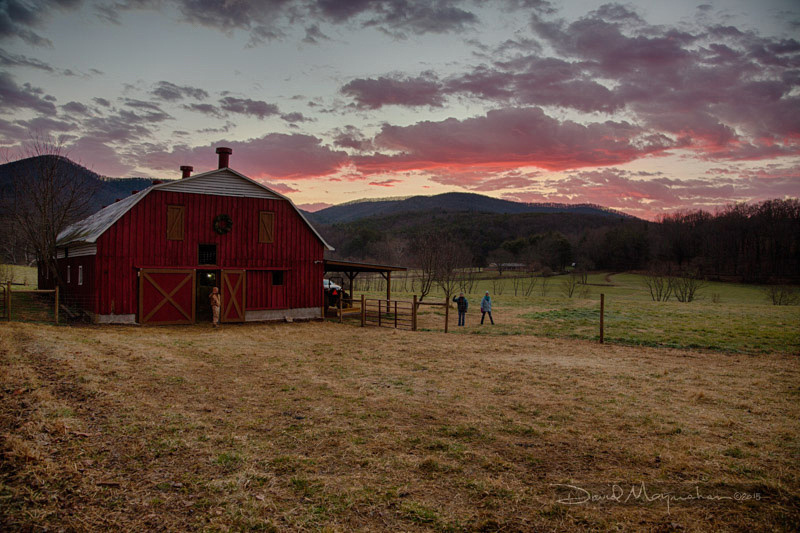 Belle Terra is the perfect name.  Tucked into the tip of a north-pointing finger of valley in the Appalachian foothills is a small farm so named.  A fast clear creek flows from a beaver pond through lush rolling pastures, a classic red barn overlooks the backdrop of National Forest and mountains, and grazing sheep complete the idyllic scene. 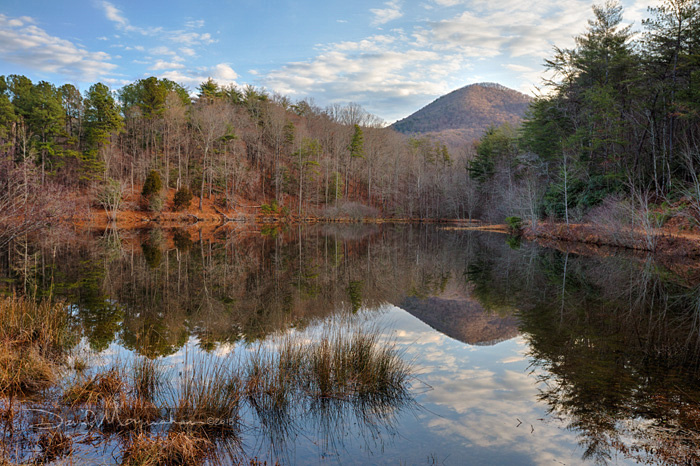 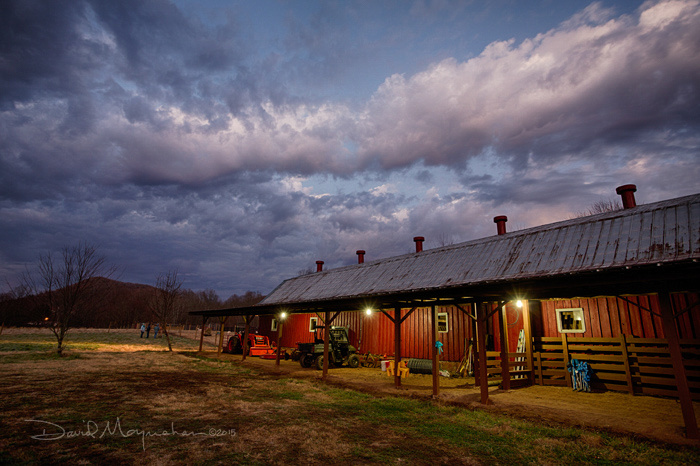 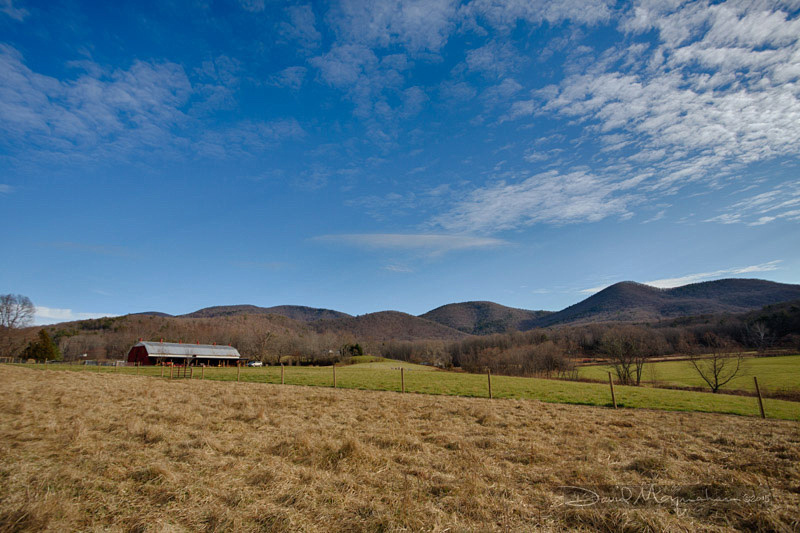 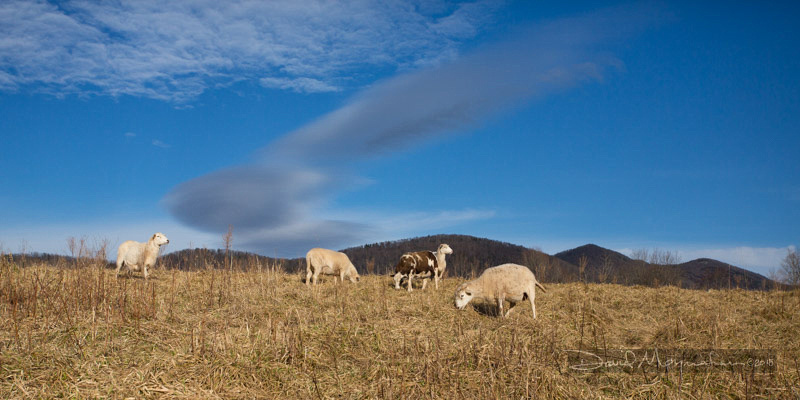 I love my Florida, but sometimes I'm called to by the neighboring mountains of North Georgia and North Carolina.  Crystal and I were visiting friends in Georgia right after Christmas. At their Belle Terra Farm, overdue lambs had been dropping for a couple days... six more pregnancies pending.  Rainy weather through Christmas perhaps figured into the timing of the ewes going into labor, but on the 27th, we were due for a respite of sunshine. 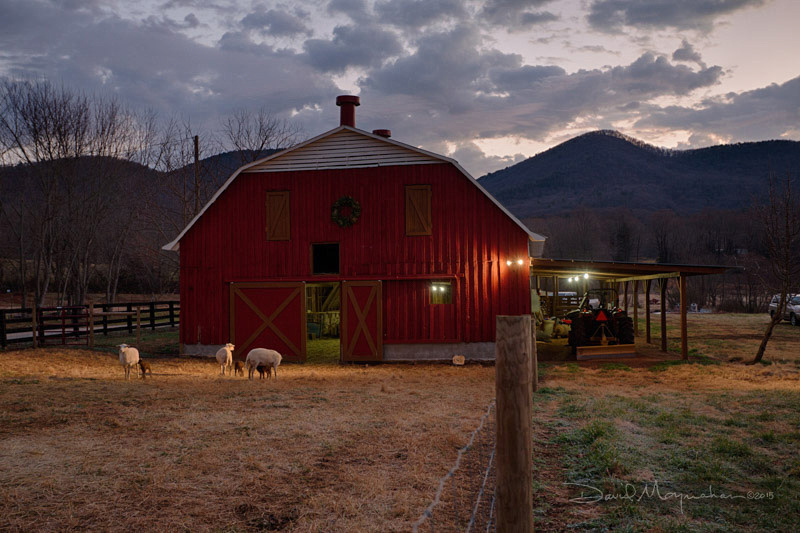 We arrived at the farm well before sunrise to bottle feed the twins whose mother had mastitis, and tend to the "black sheep" lamb whose mother only favored its twin sister.  The sheep were safely in stalls in the barn.  Sam, the night watchdog, was first to greet us, with a gentle smile and lick... a giant sweetheart of a sheep dog (but fierce too, we were told,  should a coyote or bear venture too near ...or a Crystal?). 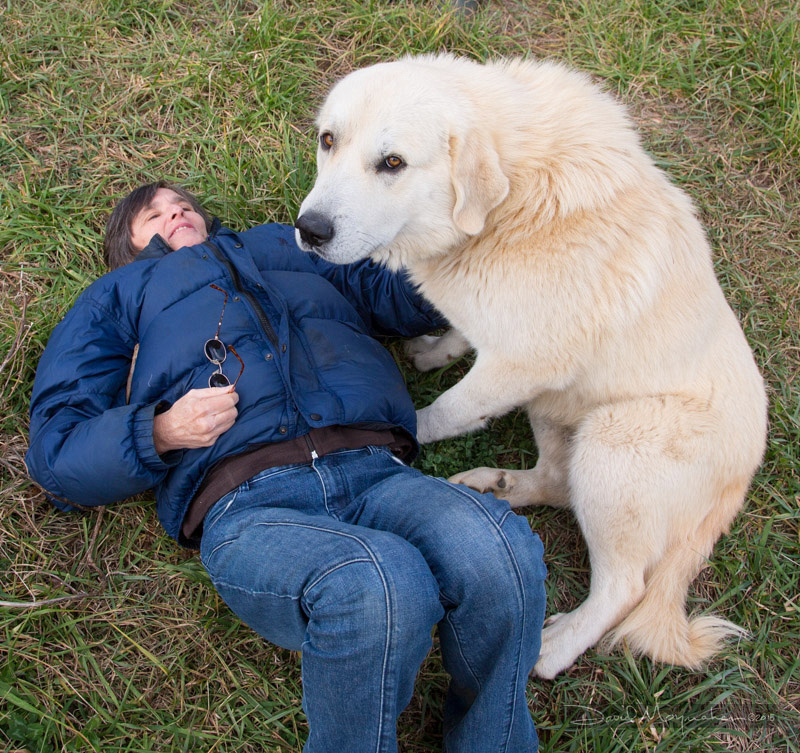 Clouds still roiled in the dawning skies.  Sunrise is slow in the mountains since the sun's rays light the sky overhead long before they peek over the mountain tops and shine into the valley.  As the clouds became rosy, an unusual bright red streak arose from the western hills. 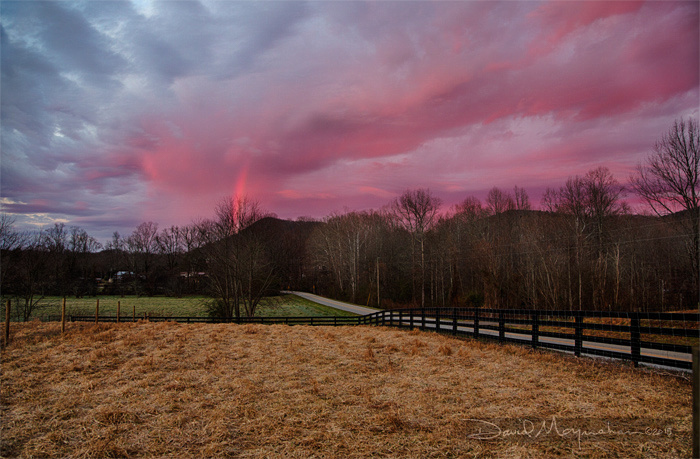 Turned out to be a phenomenon the likes of which us slack-jawed witnesses had never seen.  Slowly the streak rose into the brilliant red morning clouds while the sheep moved from the barn and spread across the rose-lit pastures.  About then, we figured out that what we were seeing was the birth of a sunrise rainbow. 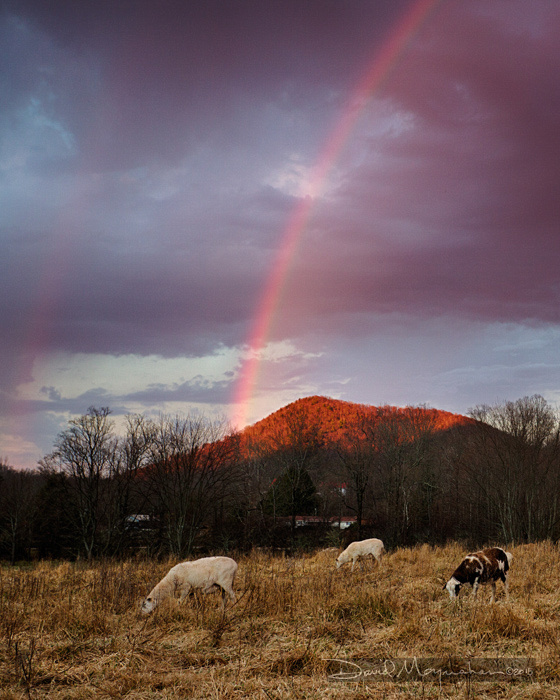 Sweet Pea, the donkey, isolated in her own little pasture because she'd been "too attentive" toward the lambs, was my stubborn foreground model as the western sky unfolded a full fan of a rainbow, and then a fainter double one after the sun peeked over.. 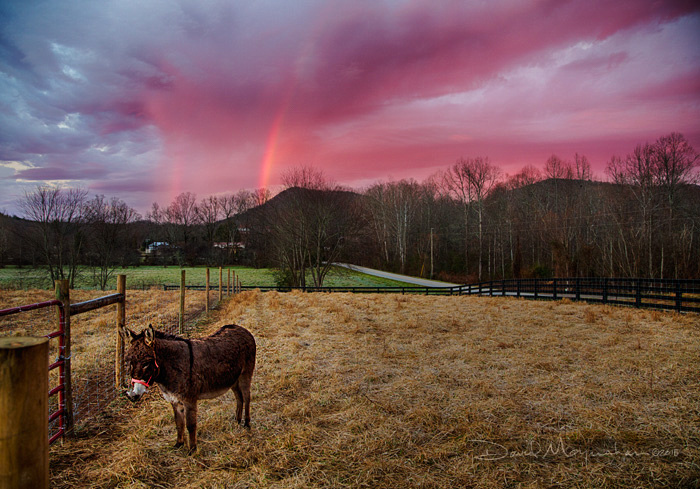 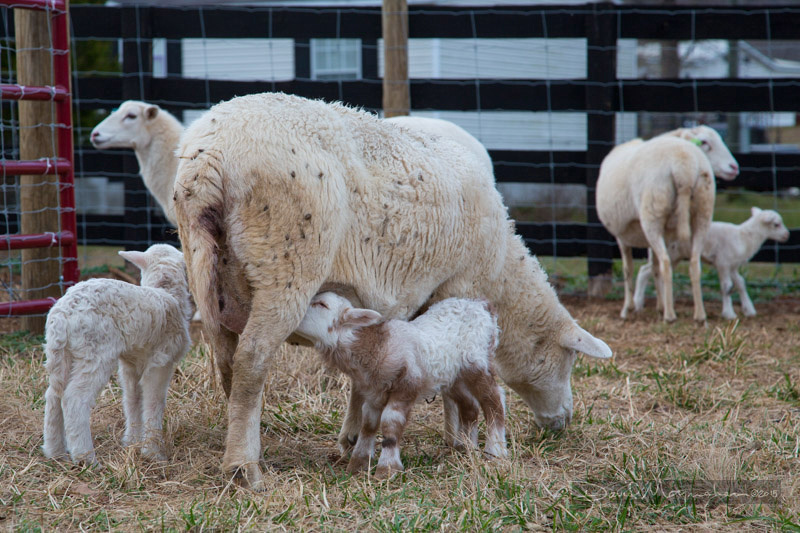 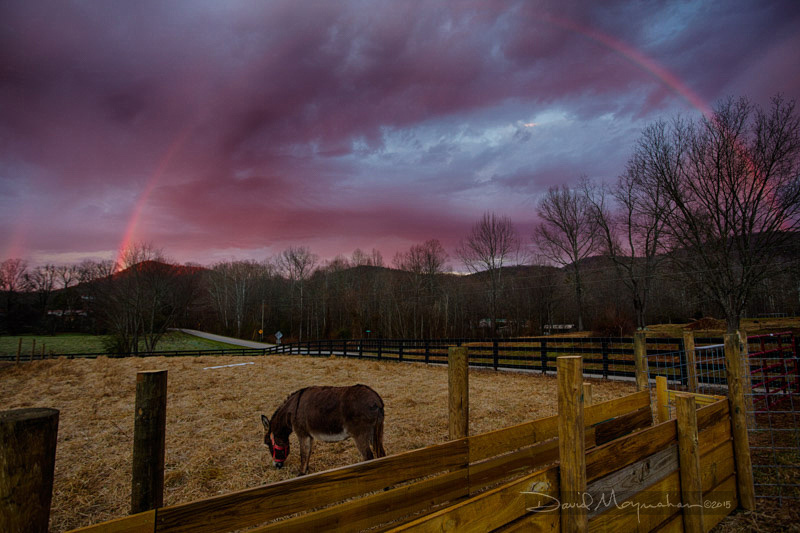 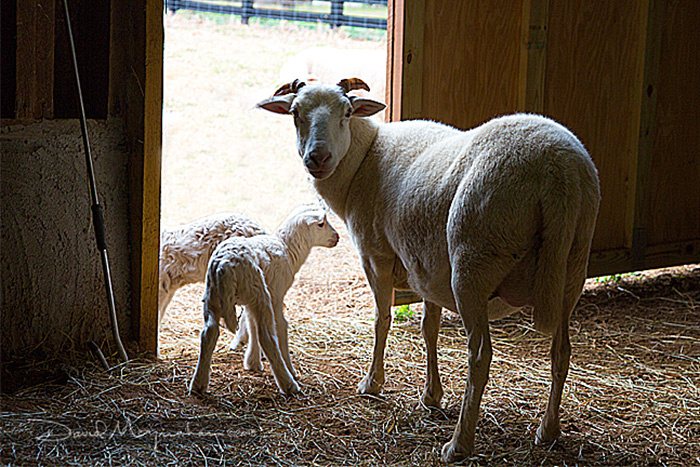 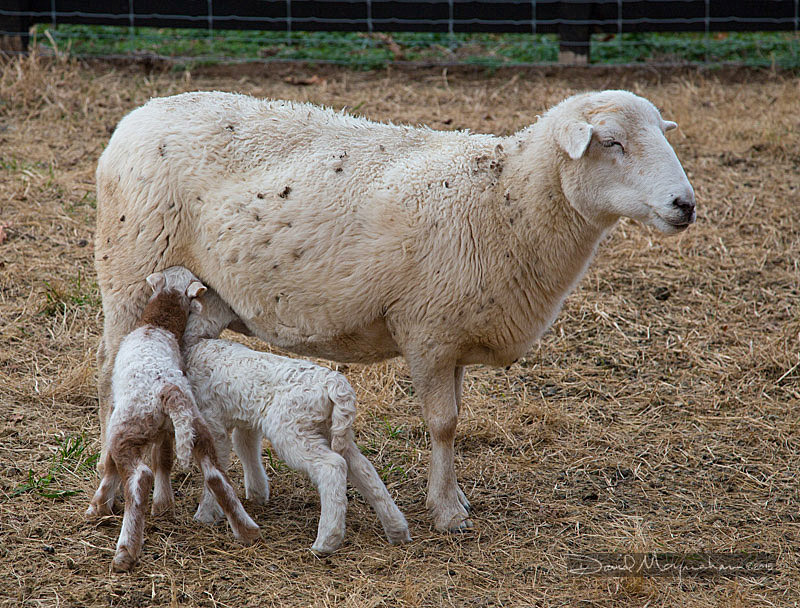 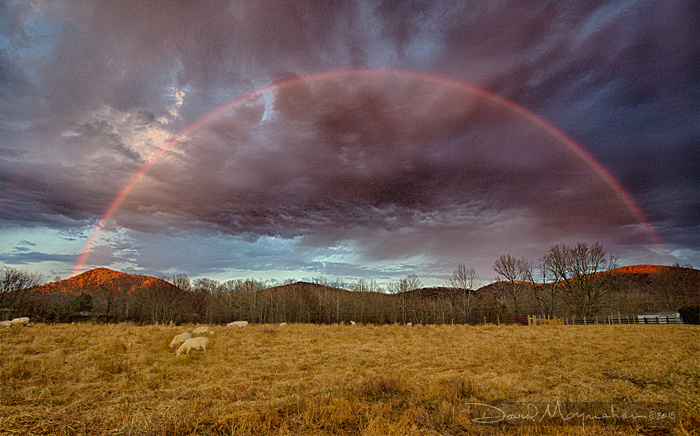 "Is that camera a tasty treat?" 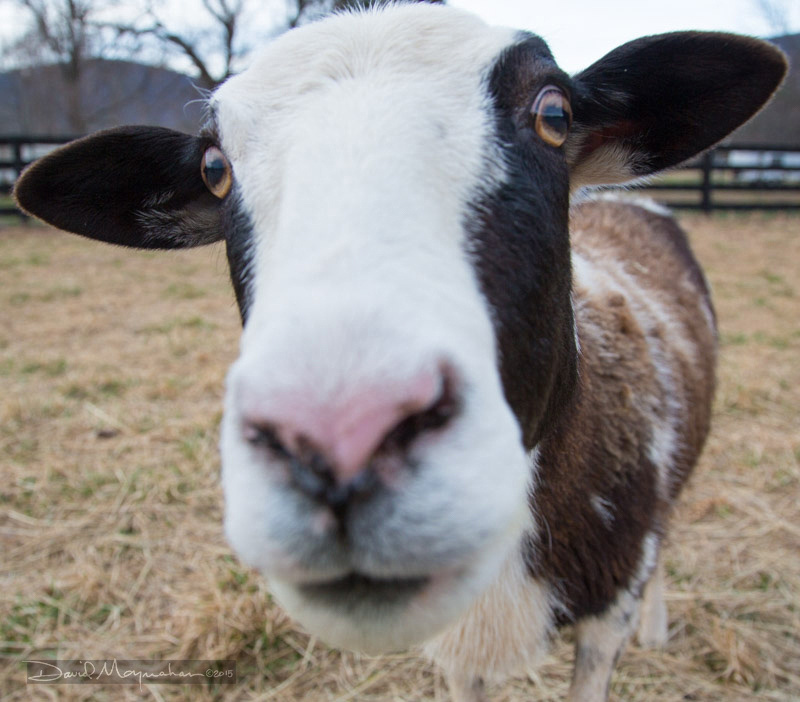 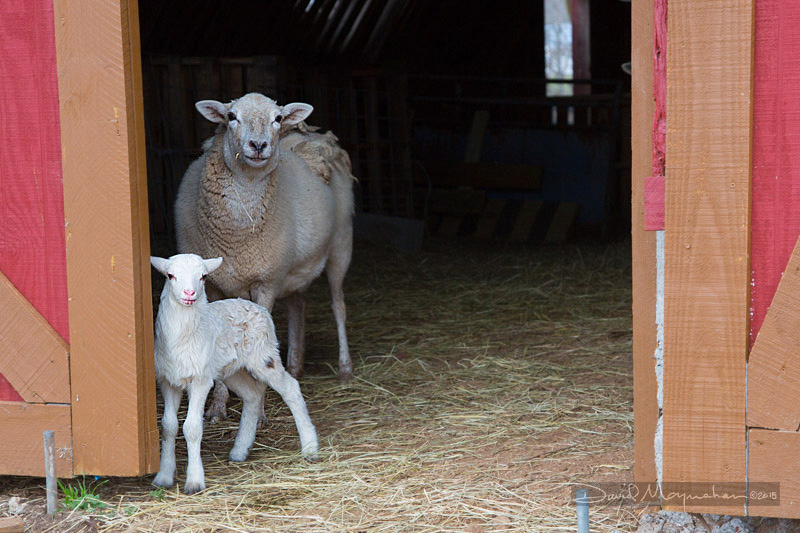 "An auspicious morning", someone said... the land, the farm, the sheep,  all part of a new chapter in our friends' lives. Indeed, our experience there was pure magic.  Another lamb, this one fully black except for a couple of dainty white slippers entered this world later that day.  A hike through the woods on the hill across the creek yielded a cache of large oyster mushrooms... the lagniappe - the cherry-on-top - for a feast of a breakfast later that morning.  Plenty more good things to come at Belle Terra Farm. 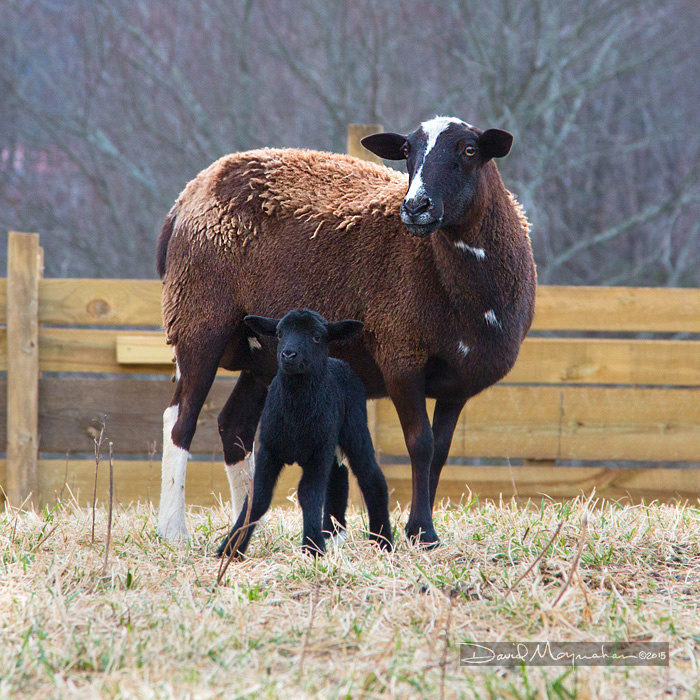 Above - Black lamb born a few hours earlier and Mama. 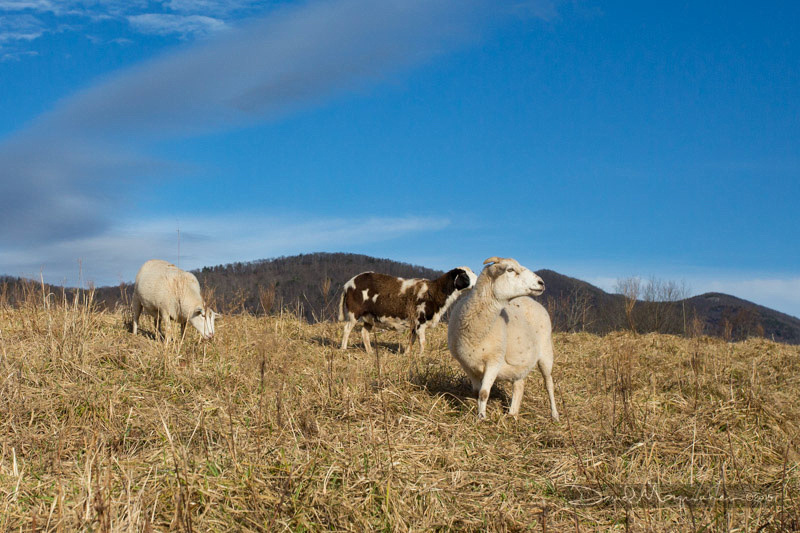 Here's what an oyster mushroom looks like... and it tastes even better... 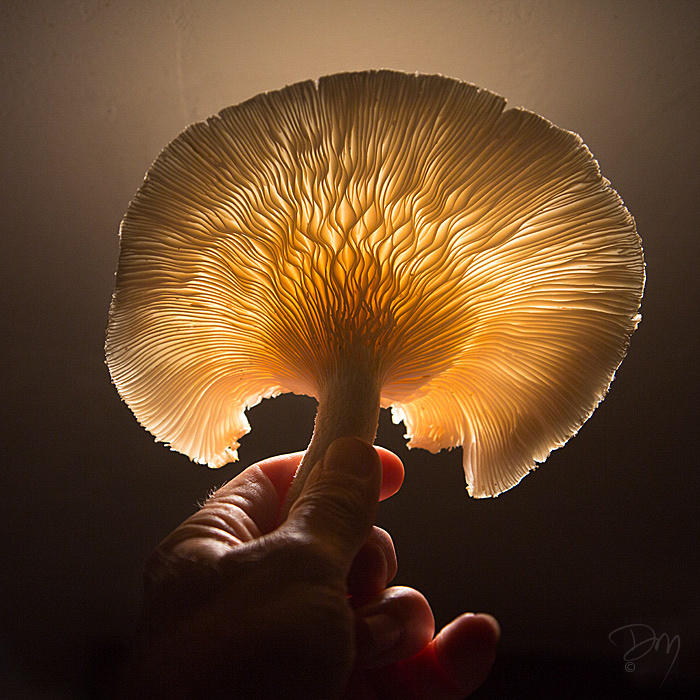 Following our visit with friends, Crystal and I added another "mountain-top cherry" at a B&B in Dahlonega, where we had a room with a view... an ever-changing one...here are three versions. 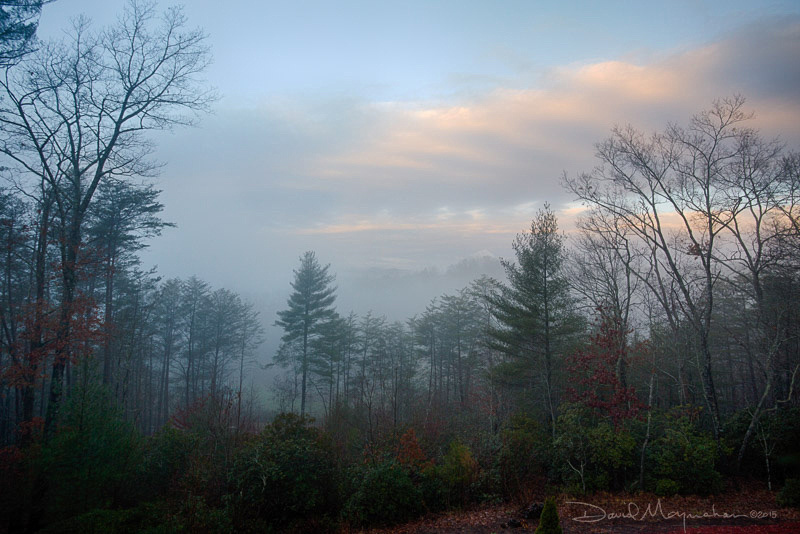 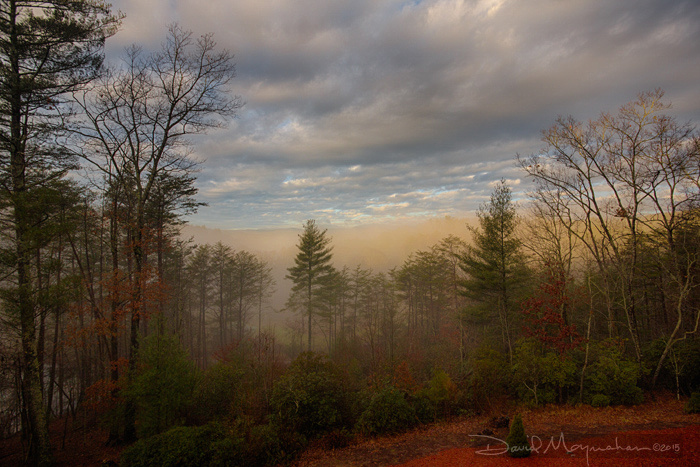 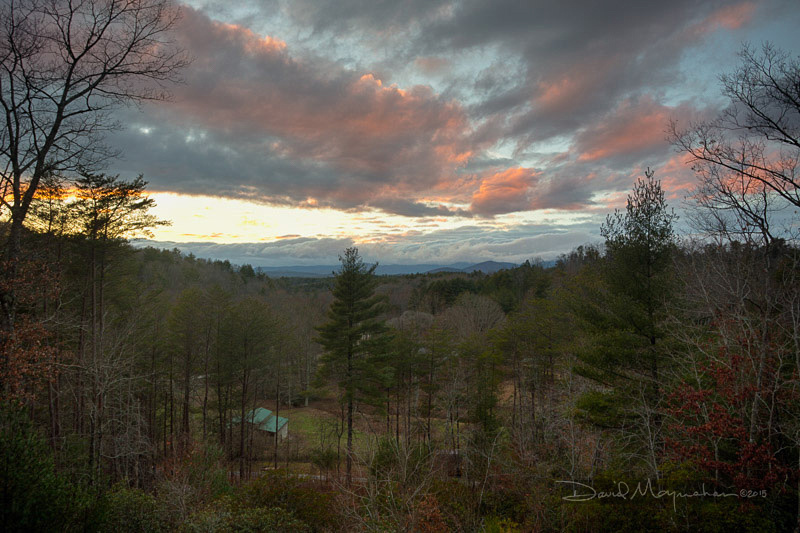 And we did some hiking another day on the Appalachian Trail.

Mountain lust satisfied, we headed back to our Florida home happy.

Thanks for joining me on this little jaunt. Please share the link with friends and family, and I appreciate comments as well.

Tara Tanaka(non-registered)
So beautifully captured, as always!!!
George Dawson(non-registered)
This pictures bring back so many memories from growing up in Louisville. Hills, with barnes, with animals and great views of parklands were a rather long ride from our suburban home. I made those bike rides often as being out of the traffic, and smog of the city was a real draw for me. These always wonderful pictures of your draw me in and a real feeling of nostalgia eased over me. What a wonderful feeling I have.

Thanks ever so much for sharing.