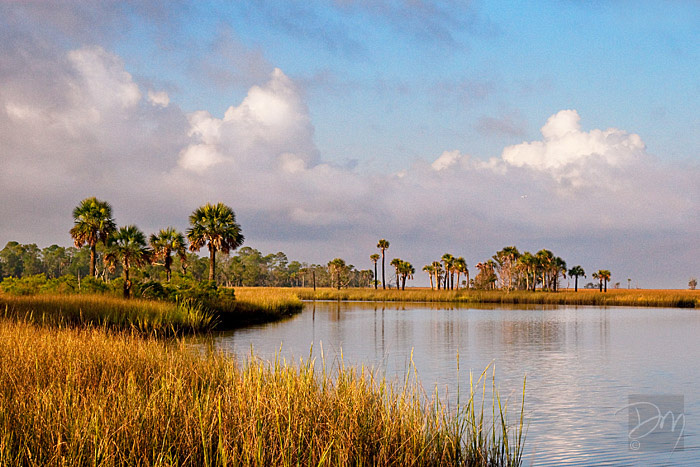 The central core of the Milky Way is visible in our Florida night sky mainly in the summer.  But it stretches into fall, so in September I made a trek to one of my favorite sites in St Marks  (where, in the past, I made the photo above) for one more starry night sky.  Oddly, I had a bit of trepidation going alone, perhaps because the location was somewhat remote.  But I set out on my hike in plenty of daylight, with a flashlight in my pocket for the journey back.  Walking the grassy trail in my trusty Crocs and loaded with gear, some spark of intuitive warning made me look down just as my foot was about to land squarely on a pygmy rattlesnake.  In that fraction of a second, I managed to step a little longer, just missing the snake, startling it, and we both leapt to safety.  Whew!  Pretty rattled, I imagined the alternate-night in the emergency room sick with pain.  I plodded on. 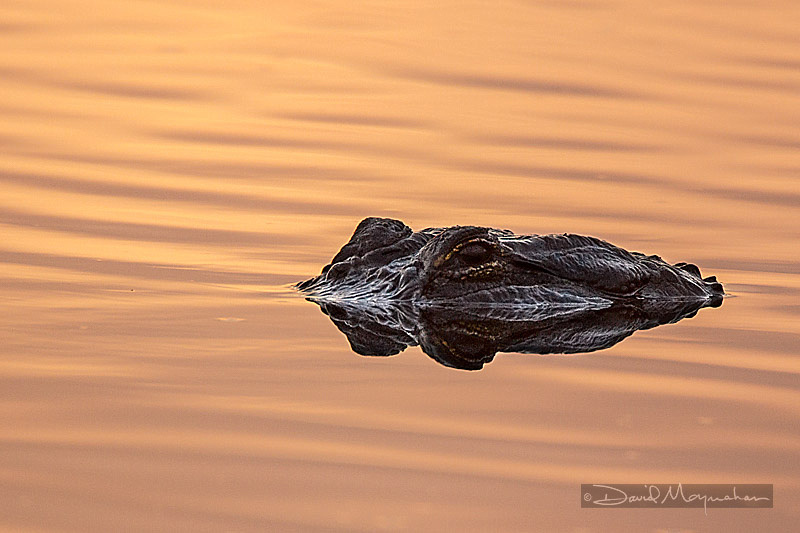 After setting up at the edge of the marsh, I started to relax, until... a large curious alligator swam up pretty close and glared at me.  What?!  Was I in its night spot?  S/he hung around the whole time, but backed off a little.  As twilight dimmed, I shined my light across the water and counted 8 sets of eyes watching me, one from as close as 10 yards. Creepy.  (I made the photo below in South FL years ago - but it gives you the idea, though the St. Marks gators weren't as tightly assembled.)

Far less shy, swarms of mosquitos, and worse -- no-see-ums -- ascended from the marsh, forcing me to poison myself with DEET. Ugh.  (What we do to get the picture!)  Here's a selfie making an early frame. (Looking closely, you can see the gator in the water.) 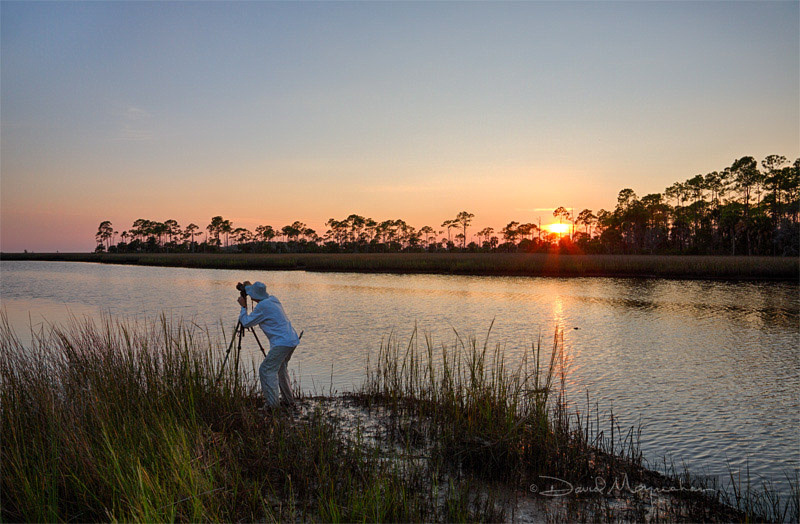 I made about 30 images of the exact same scene over a few hours. I brought a 2nd camera and even a 2nd tripod, knowing there would be periods of time between frames during some sweet light, though I didn't stray far.  Didn't find anything too inspiring, especially with all the distractions, but here's a marsh shot of an old snag. 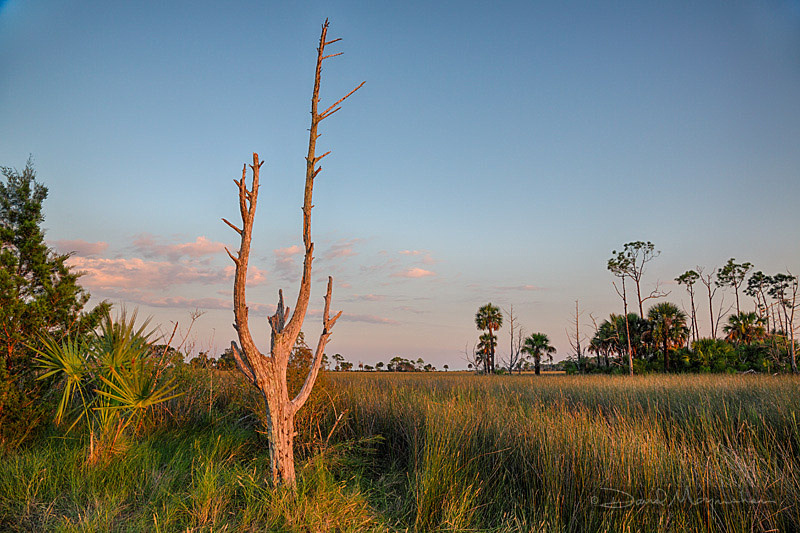 Why 30 "duplicate" images, you ask?  And mostly before the stars even appeared?  I put together some of the frames into this 45 second time lapse video so you can see what I was trying to do.

Putting it all together, here's what I got. 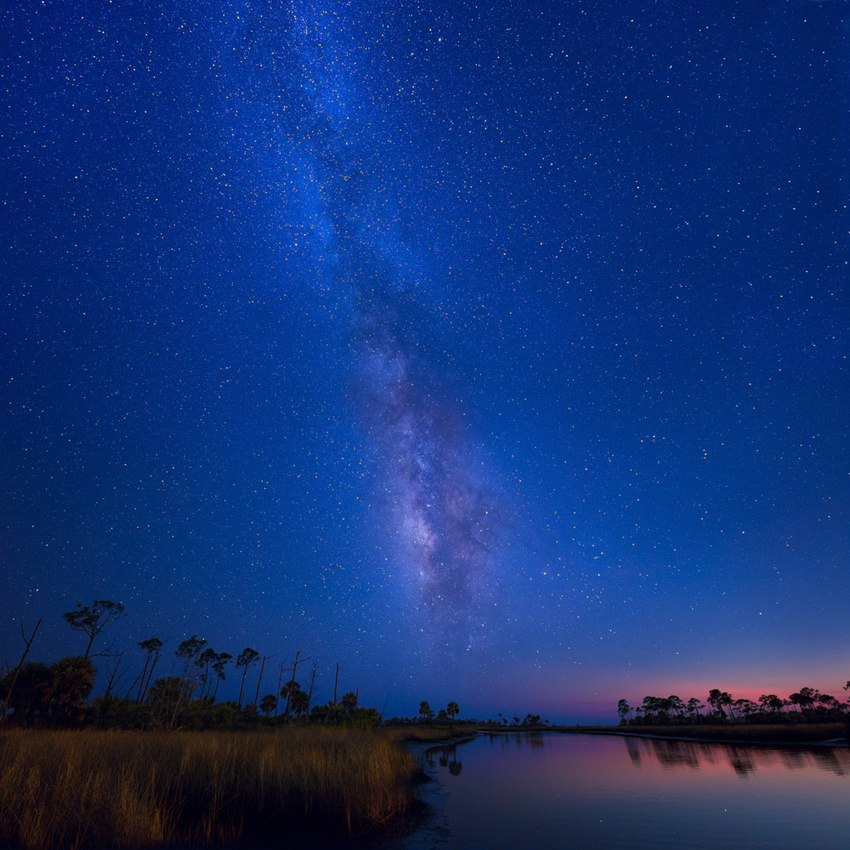 From this St. Marks vantage, I could see the whirling disk of our galaxy wrapping from horizon to horizon across the sky above me.  The "core" or center of the Milky Way, near the horizon in this photo, is more dense and colorful.  Our sun is one of the tiny dots that comprise this vast awesome collection of stars, and our planet Earth, an invisible speck of dust.  With such perspective, we humans are both miraculous and insignificant. I wish we could make fewer "mountains out of molehills" and get along better with each other and take better care of our fragile speck of dust.

Your comments here are most appreciated.  And please share this link across the universe and cyberspace.

Gail Alexander(non-registered)
Thank you for sharing your time and talents, and risking your life to do it, for these amazing pictures! We are so blessed to be in this beautiful state of Florida, and you inspire us to “get out there” and enjoy it. We are truly miraculous and insignificant and this picture puts it all in perspective! Thank you!
Cynthia Brown(non-registered)
Thanks for the beautful pictures of our St. Marks & the time lapse...i passed on to my sister and cousin as we all grew up here but enjoying these now as if for the first time, i think we appreciate it more as we’ve aged!
Mark N Canter(non-registered)
The sky starts at our feet! Standing right here on Earth, we are voyaging in brilliant vastness. We are astronauts---star travelers. Our lives are waves of the cosmic sea.
Mark N Canter(non-registered)
Just read the following prayer in a Unity-published pamphlet "Interfaith Prayers for Peace". (It's listed as the offering from Judaism.)

"Grant me the grace of wonder. Surprise me, amaze me, awe me in every crevice of your universe. Each day enrapture me with your marvelous things without number. I do not ask to see the reason for it all: I ask only to share the wonder of it all."