The Realm of the Gator 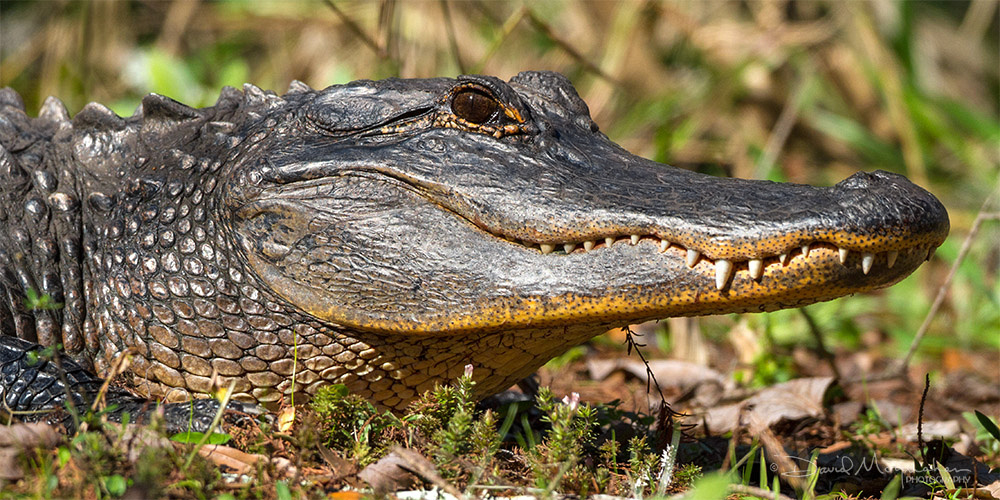 I remember being thrilled when I photographed my first wild alligator about 20 years ago.  I was hiking by Fisheating Creek and came upon a sizable fellow sunning on the bank.  I managed to squeeze off one quick shot before he exploded into the water and disappeared.  That's what they usually do when surprised on land -- they're really dramatic, making a leaping plunge.  It's always a momentary scare, then thrill.  Maybe the same for the gator?

Anyway, I realized that, over the past couple decades, I've made a couple hundred photos of Florida alligators in all sorts of conditions -- on land, in the water, underwater, at night, babies and big'uns. 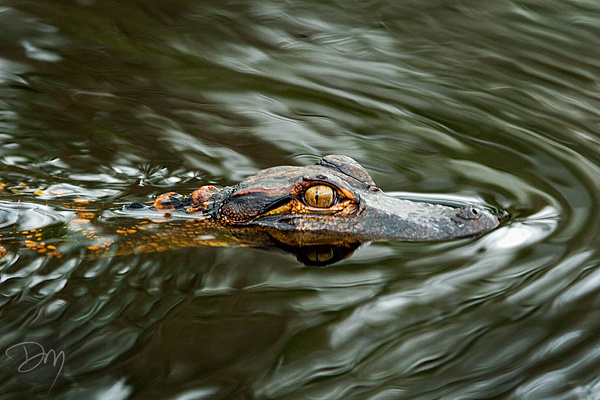 Young Denizen.  This youngster swam out to my kayak from shore to investigate, while its seemingly-bored teenage babysitter (a 4 footer) sat nonchalantly on the bank. 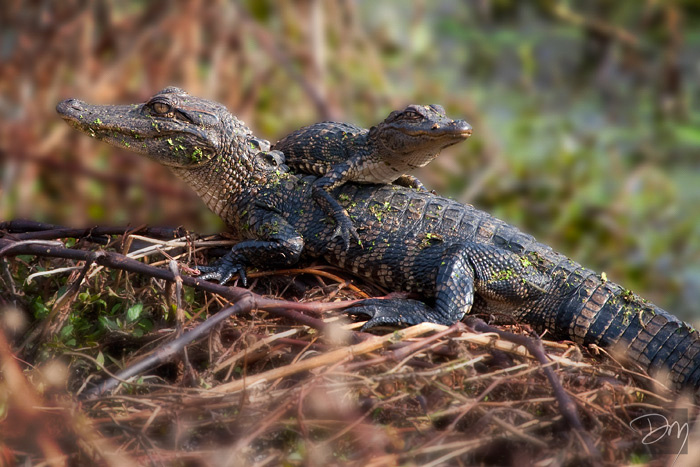 I never feared gators as a boy tromping, swimming, or paddling in the Everglades.  Naive boy.  As an adult, I've come to respect these prehistoric top predators.  They act on instinct...

so don't ever look like a smallish animal coming for a drink (by squatting and splashing at water's edge),

or harass babies or nest - Mama's nearby, or annoy a big male by getting too close,

or think it's cool to jump in to see one underwater,

or wade around in gator-waters at night.

I'm embarrassed to confess that I've done all of these things.  I've been lucky, but I'm more cautious now.  So, here is a selection of my favorites for "armchair viewing".  Enjoy! 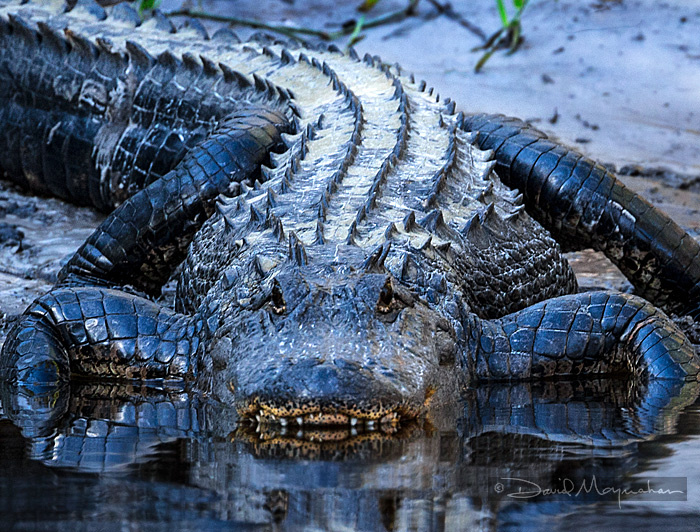 Menace. Just as we were passing, this big boy slipped quietly into the creek, just like in the Tarzan movies - before the attack. 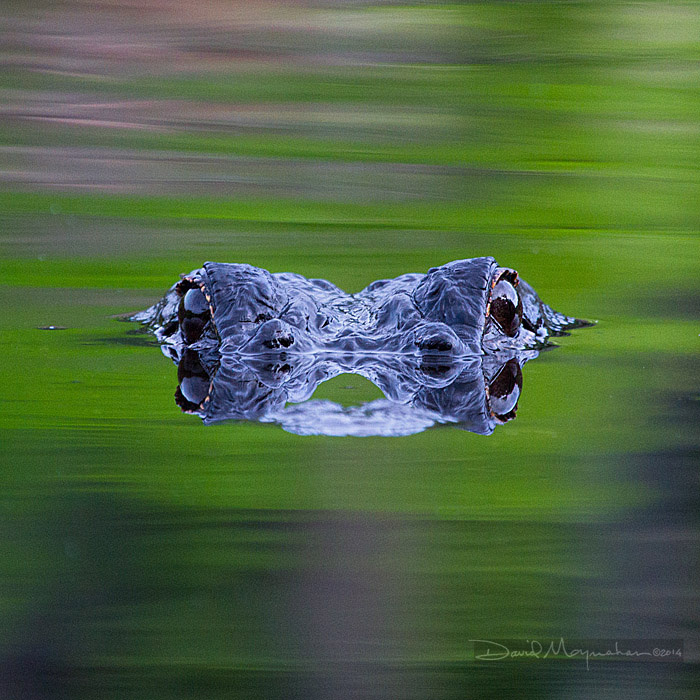 Years ago, Crystal squatted in the shallows at the edge of Shepard Spring to wash her face after a hot hike.  We were on a summer camp dayhike and our gaggle of middle-school-age campers had just seen the big resident gator explode into the water from that very perch and dive deep into the clear water.  (I'd seen this gator on previous visits, so we had approached stealthily in hopes of spotting him before he split.)  So now the coast was clear, right? Not. A minute later, our daughter Marley screamed a warning to Crystal ...and C scrambled up the bank to where we were.  From the gator's perspective, a "small animal" was splashing at water's edge. We watched in horror as it came charging up fast through the water for its prey...right to the spot where Crystal had just been.  Marley was a hero that day.  Later, as I thought about it, this gator had, only moments earlier, been suddenly scared by the 20 humans arriving at its quiet forest spring.  Then, instantly, when "food" appeared, the reptilian brain took charge and all wariness disappeared. Years later I tested this observation.  At a remote "pond" along Fisheating Creek, I saw a large alligator about 25 yards out in the water.  I squatted at the edge and splashed lightly.  The gator immediately made a beeline toward me, coming fast. (The photo below.) But as soon as I became a tall human again (standing up), s/he instantly stopped (the photo above).  I tested this repeatedly and it was like I was holding a remote control... small animal = attack. Scary human = stop and be wary. No seeming connection between the two versions of me.  A little disconcerting. 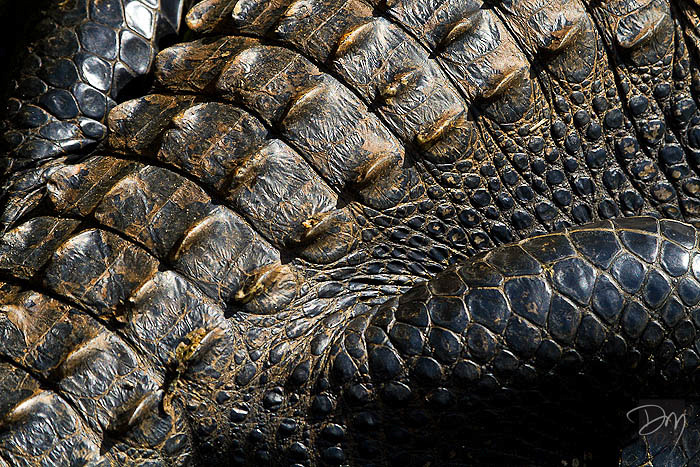 Alligator Hide.  Beautiful, especially when worn by its source. 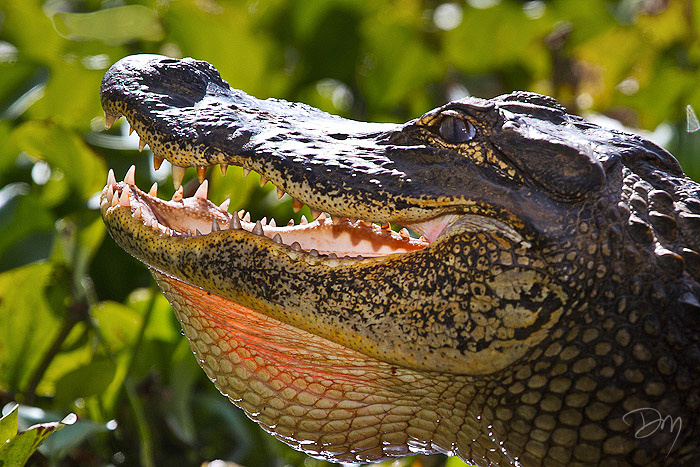 Happiness is a warm sunny log. Same big gator as the Hide photo above, deep in the Fakahatchee Strand.

What do you get when two (foolish?) photographers, determined to make one striking photograph, are willing to spend 6 hours after dark standing in chest-deep alligator-infested Everglades swamp?  If they are lucky, you get the photo below.  We were doing a lot of experimental lighting and trying to make our enormous alligator skull hover at the water's surface.  We weren't so lucky... initially. So we spent the next day devising new strategies and tools and returned for a 2nd long evening in the same spot, still hoping alligators dislike wetsuits and lights.  We passed quite a few gators on our paddle in and out, but fortunately didn't encounter any (live ones) in this mangrove tunnel. This was our first of many nightscape collaborations over the past decade -- with my good friend, John Moran. 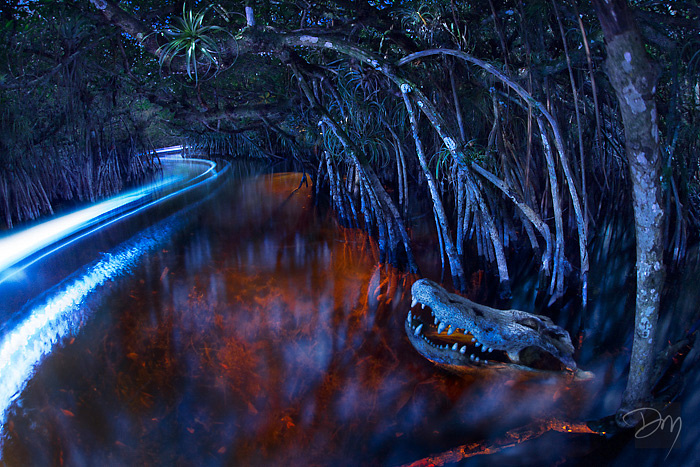 Once when paddling the Braided Swamp (Lower Wacissa) with Sue, Jeff, and Crystal, we came upon a nest of youngsters. Mama was nowhere in sight, so I took the opportunity to make some portraits.  Love the "halo" of light this first one was wearing. 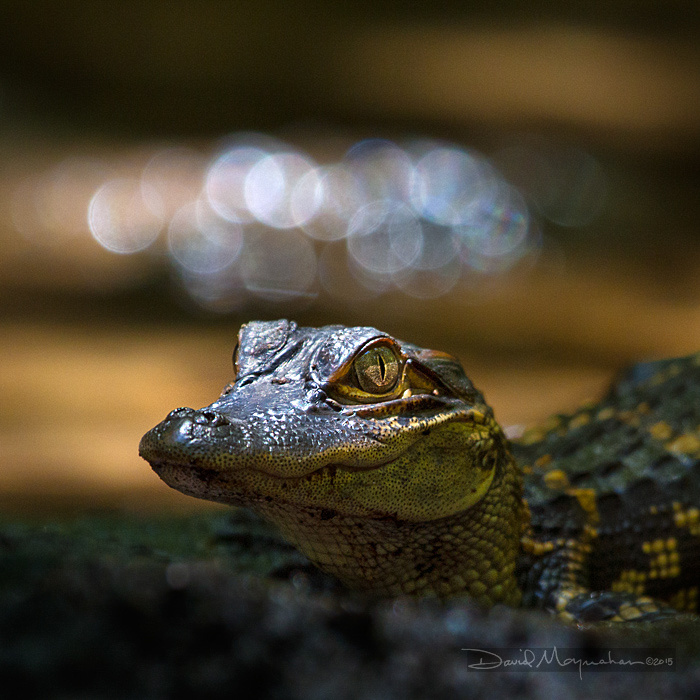 Visiting another beautiful remote spring -- this one deep in a coastal swamp of central Florida -- my family quickly slipped into the cool waters to escape the heat and mosquitoes, and wash off the mud.  I was assembling my underwater camera rig onshore when someone yelled "Gator!"  It was about a 6 footer in the shallows along the far bank. As they retreated, I scrambled to get in.  I felt confident this gator would not aggress and was thrilled by the chance to photograph one in clear water.  Sure enough, the gator wanted none of our mess.  I had to follow it down, shooting away, until it found a shadowy crevice in which to wedge itself about 25 feet down - safe from the human invasion.  By then, I'd run out of breath.

Denizen of the Deep

Denizen of the Deep. 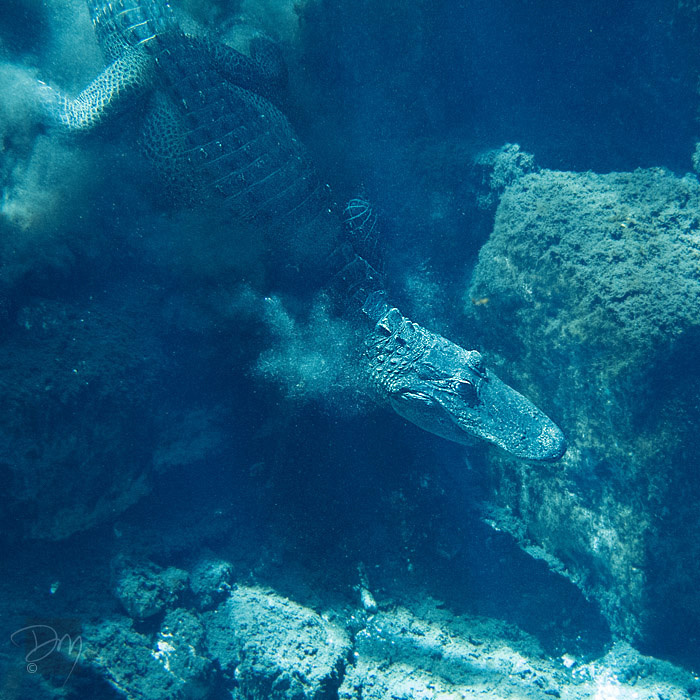 Spring GatorGlad he fled rather than attack. 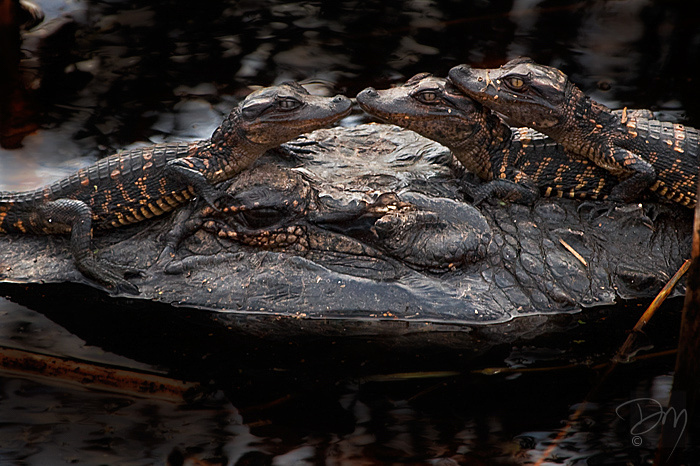 And another time  -- of drought.  Alligators tend to gather at the water holes (where the fish have concentrated) in dry times.  John and I lucked into such a moment.  We set up our tripods in the shallows late in the day... 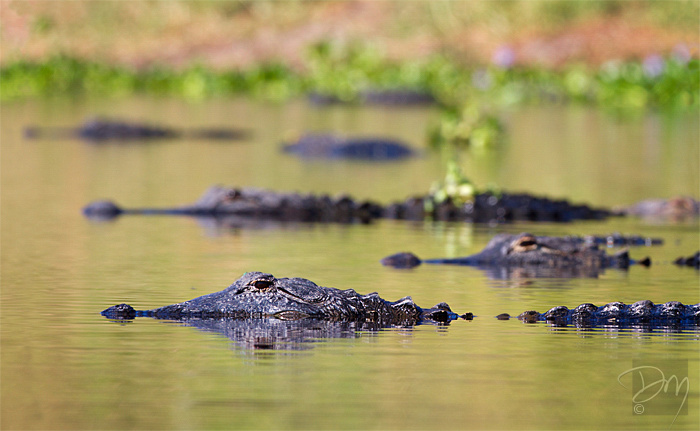 ... As the daylight faded, the flashes on our cameras reflected a lakeful of gator Eyeshine! 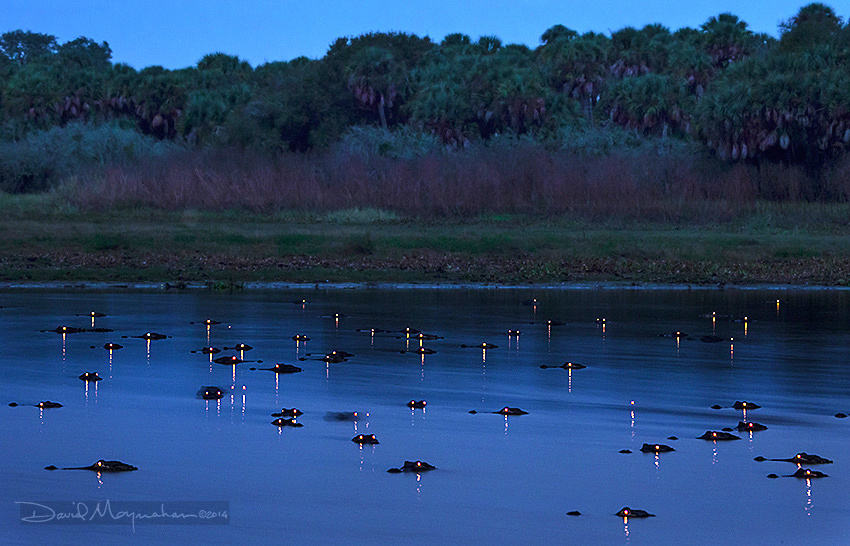 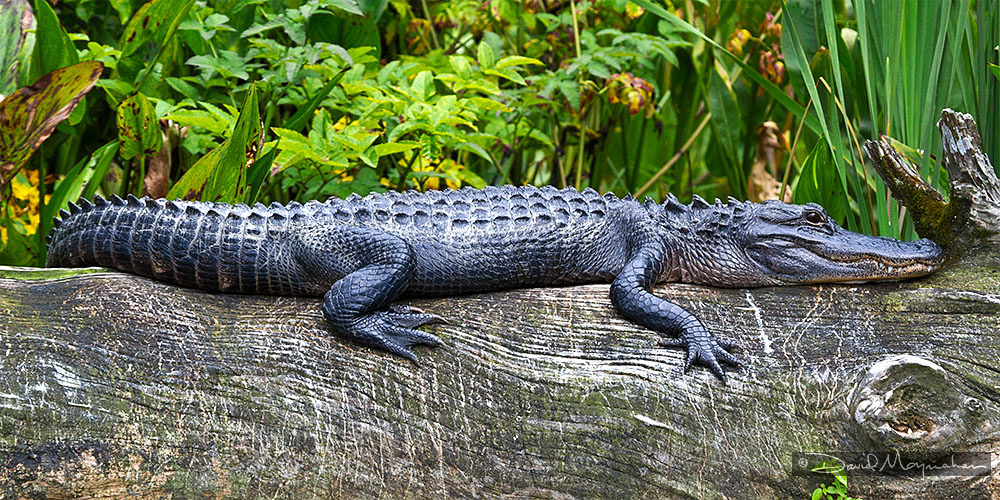 Wakulla River.  You can tell this log gets napped on a lot. 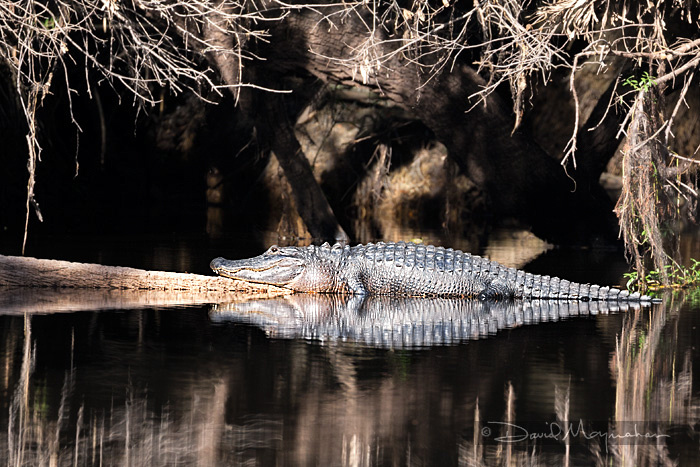 The Man Behind the Curtain.  In the spotlight and framed in shrubbery along the Econlockhatchee River.

I've seen some real giants too... like this one. Peering over a small bridge along a trail at St Marks -- there just a few feet away, asleep in his enormity, was the bridge's sentry, submerged but for his eyes and nostrils. 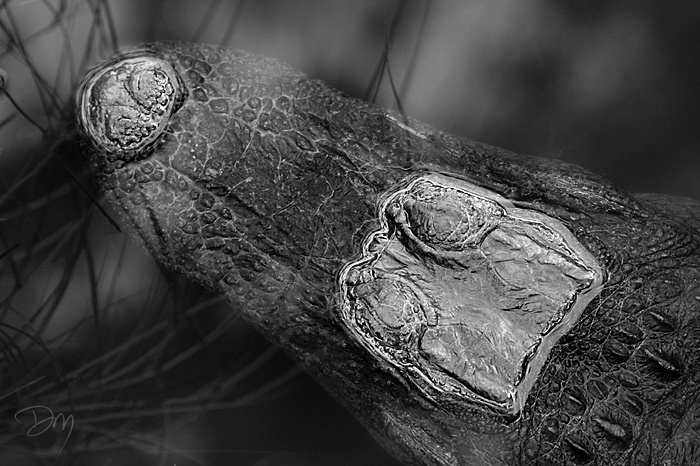 And this one... who looked like it just ate a horse. 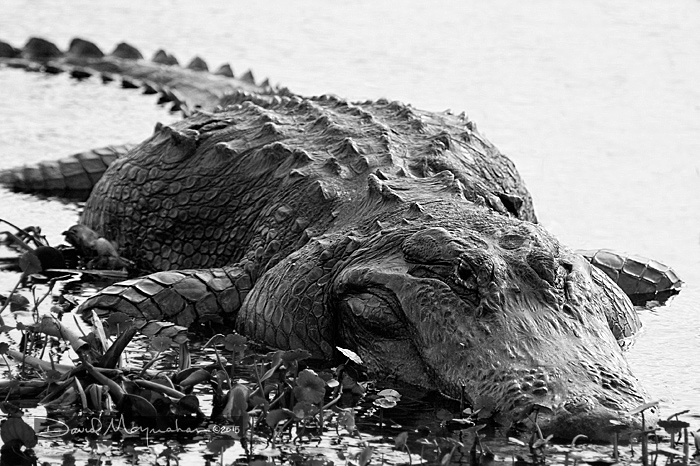 And one more. This "pet" goliath was a bit too friendly at Gatorama.  As I was setting up low to the ground near the edge of his pond, he kept trying to climb out toward me and Allen had to keep urging him back into the water (and reassuring me). I had (and still have) faith in my Gator Whisperer... though I was prepared to run if told.  It was impressive that this huge prehistoric reptile responded to Allen's sounds and commands. 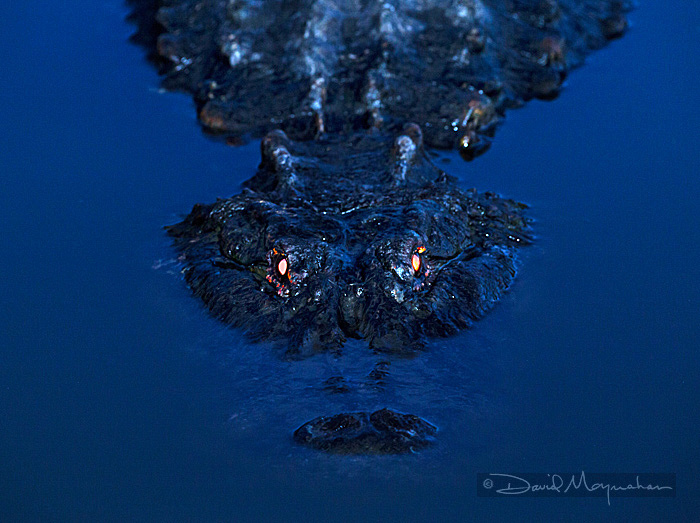 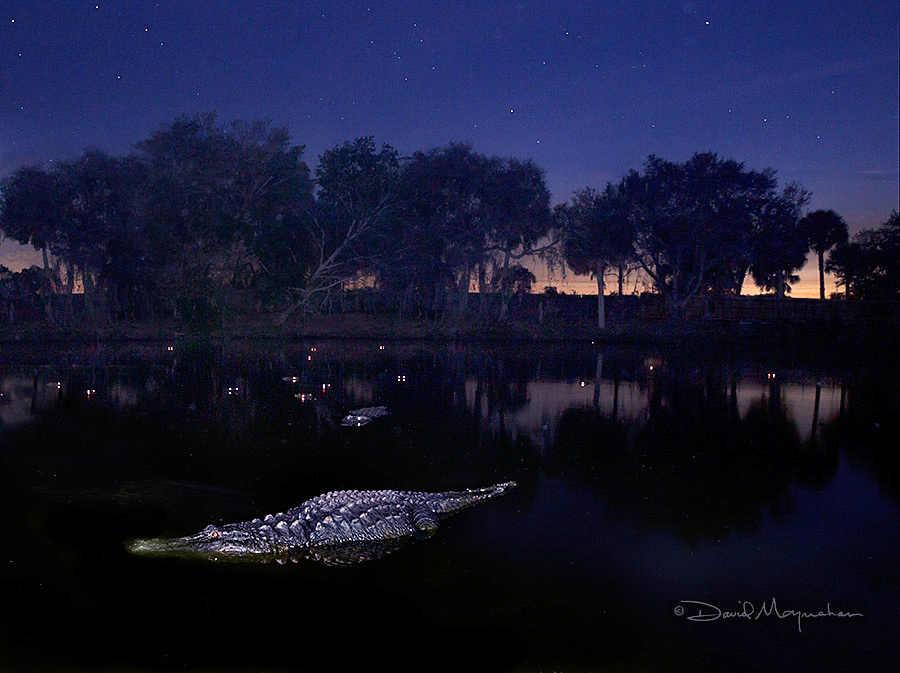 Night of the Gator 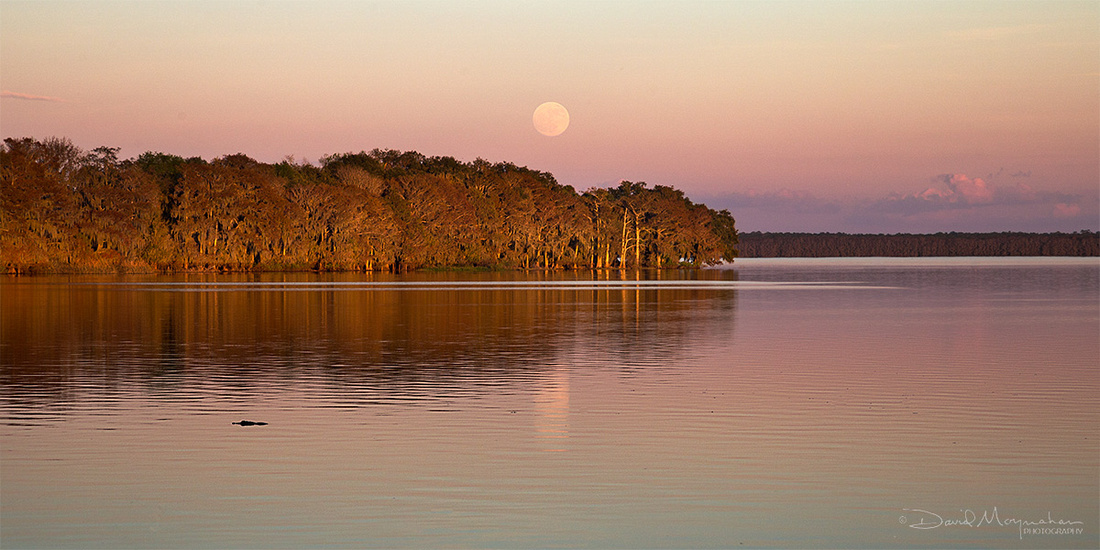 There you have it.  At the end of the day, the gator swims off into the sunset (and moonrise) at Newnan's Lake in Gainesville.  Hope you've enjoyed my alligator tales and shots.  Your comments here at the blog are much appreciated!

Lydia Riedell(non-registered)
So happy to have crossed paths with you and your photographs. I really enjoyed the alligator collection. You capture the vibrancy in nature and in its inhabitants!
George and Joel Dawson(non-registered)
We always enjoy seeing your photos but are dismayed at the same time. We too, have taken many photos of alligators over the years but just don't know how to get the images you get. I know one of the reasons for your success is the effort you put into getting these shots. We are unwilling to spend the energy, so looking at your shots is a lot less effort than getting deep into the field, so we will just treasure you work.

Thanks so much for sharing your talent to your fans.